Built around 1200AD as the first church for the settlement that grew up around Castle Rushen. Later becoming a school for boys as it is now depicted. It is the oldest roofed structure still standing on the Isle of Man today.

In line with the advice from the Isle of Man Government all Manx National Heritage sites are closed until further notice.

Thank you for your patience and support during these difficult times – we look forward to welcoming you back soon.

Further details regarding our 2021 opening times and dates to follow.

The Old Grammar School will be closed until further notice.

We thank you your patience at this time.

The building survives today thanks to a preservation order being placed on it in the 1950’s by the Manx Museum Trustees in order to save it from the fate of the surrounding streets which were being demolished to make way for the car park.

Built originally in 1200AD as the first church for the settlement that grew up around Castle Rushen, the building was later developed as a boys’ school.

Inside its Romanesque arches date back to the 13th Century when the building was the Chapel of St. Mary, today its interior depicts the later Victorian school room.

The Old Grammar School is open exclusively for school workshops, pre-booked groups and special events by prior arrangement. 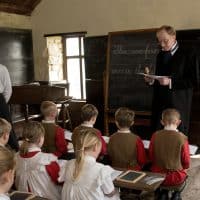 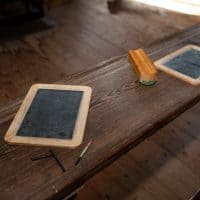