World heritage timepieces to chime on the Isle of Man 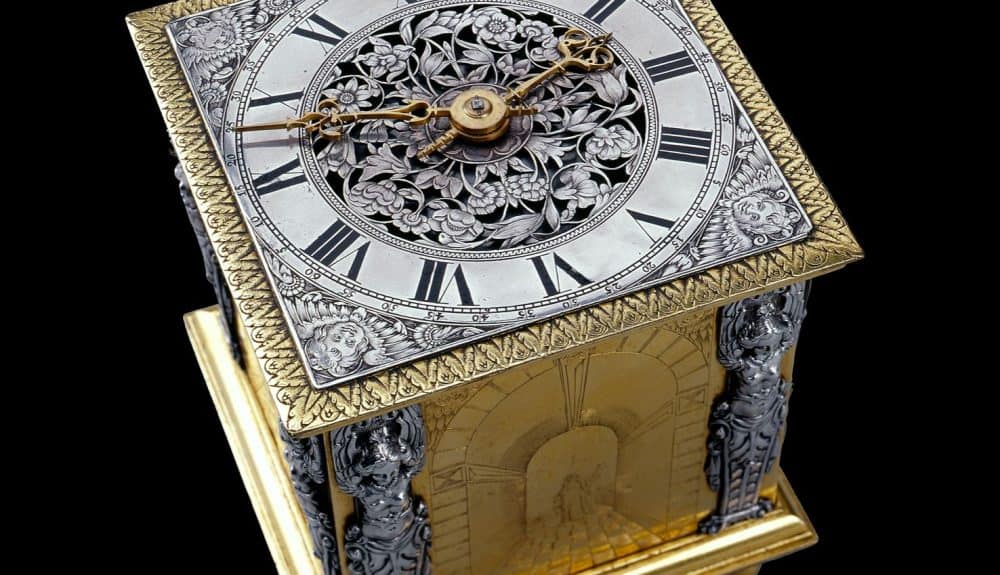 Some of history’s most significant British timepieces dating from 1500 to 1800 will go on display on the Isle of Man in a new Luxury of Time exhibition, made possible thanks to the generosity of the philanthropist Dr John C Taylor OBE.  The stunning spectacle showing the golden age of clock and watch making will be on display at the Manx Museum in Douglas from Saturday 15 February  2020 until Sunday 10 May 2020.

Born in Buxton, Derbyshire in 1936 and schooled at King William’s College, Isle of Man, Dr Taylor returned to the Island in 1977 to bring up his young family.  He founded Strix in 1981, made numerous world-changing inventions including kettle controls now used a billion times a day; he retired and left the company in 1999.  He has over 400 patents to his name and has since focussed on philanthropy and passing on his knowledge to future generations through talks, lectures and endowments.  He has also built a stunning home in the Isle of Man – Arragon Mooar House – which is elliptical in shape, because in the words of Dr John C Taylor OBE,“building a circular one would have been too easy”.

“I’ve always loved clocks and my interest started at a young age when I would watch my father, who was an engineer and inventor.  He would boil clock mechanisms in a pan to release built-up grease and then scrub and clean the metal until he breathed new life into the gear wheels and got them working again.”

Dr Taylor has since built up a unique collection of early clocks and watches from the British Isles that tell many stories of great design, metal work, furniture making, entrepreneurialism, engineering and timekeeping.

“Hand-made English clocks, many dated and numbered, were in fact the first mass-produced luxury items, heralding the start of the industrial revolution.  Not only is the craftsmanship astoundingly intricate, it amazes me that such wonderful works of art could be created to such a high specification, when spectacles were rare and clockmakers had to make their own tools.”

The exhibition will feature 30 different outstandingly beautiful timepieces, including a gothic lantern clock, made by blacksmiths (from 1500) plus majestic clocks and exquisite watches.

This carefully curated collection has many Royal connections.  The silver and gilt David Ramsay astronomical verge watch (c1618) puts modern “complicated” watches in their place.  The dial of this watch shows the hour, the day (sign, name and deity), the month (name and date) together with the sign of the Zodiac, the age and phase of the moon, and the planet hour.  This incredible timepiece bears an engraving of a portrait of King James I and is signed, ‘David Ramsay Scottes me Fecit’.

The Joseph Knibb ebony veneered table clock with tic-tac escapement (1677) also has an impressive pedigree.  It was part of King George III’s collection and was presented to his surgeon, Thomas Beckett. It then remained in the Beckett family until it was sold to the collection of the renowned Isle of Man watchmaker, George Daniels.

Taking pride of place in the exhibition is the John Harrison of Barrow Longcase Clock (1726), made famous through global interest in the Longitude Prize.  This magnificent timepiece was originally created as a land-based clock against which to calibrate his sea clocks. Following Harrison’s addition of his gridiron pendulum, this became the most accurate clock in the world for 150 years.

“The exhibition would not have been possible without the support and collaboration of Isle of Man resident, inventor and philanthropist, Dr Taylor, and his team, to whom Manx National Heritage are extremely grateful for their generosity in bringing this unique collection together for display on the Isle of Man for the first time”.

Dr Taylor commented: “Most people state that the world’s greatest invention is the wheel. The wheel is the servant of mankind, but mankind is slave to the clock so therefore, surely, clocks are the most important objects ever invented.”

Following the launch of the exhibition, Dr John C Taylor OBE will deliver a public lecture on 5 March 2020 at the Manx Museum, with all proceeds to Manx National Heritage, Isle of Man registered charity no. 603.  Tickets are priced at £10.  Dr Taylor will also be leading an exclusive guided tour of the gallery on 9 April. Please see www.manxnationalheritage.im for details.

Dr John Crawshaw Taylor OBE FREng was born in Buxton, Derbyshire in 1936.  He was sent as an evacuee to Canada in 1940 during the Second World War, returning home five years later in a convoy where five ships were torpedoed.  He is dyslexic and failed his 11 plus, his 13 plus and Common Entrance exams.  He was accepted and educated at King William’s College in the Isle of Man and then at Corpus Christi College, Cambridge University, where he studied Natural Sciences and participated in the 1958 and 1961 Cambridge Spitsbergen Expeditions.

After graduating, Dr Taylor joined Otter Controls Ltd, founded by his father, Eric, and began inventing and designing snap action controls using bimetal.  Many of these early inventions are still in production today.

In 1977 Dr Taylor moved to the Isle of Man and in 1981 he founded Strix Ltd, retiring from the company in 1999. Strix Ltd was named UK manufacturer of the year in 1995 and has received four Queen’s awards – three for export and one for innovation that was awarded for Dr Taylor’s 360° cordless kettle connector and underfloor heating element inventions.

He is one of the world’s leading experts on the work of John Harrison, an early pioneer in timekeeping and sea clocks.  This led Dr Taylor to design and build the Corpus Chronophage, a three-metre-high clock that is displayed on an exterior wall of Corpus Christi College undergraduate Taylor Library and is controlled by a Grasshopper escapement as a tribute to John Harrison.  This time-eating Chronophage clock has become the main visitor attraction of Cambridge, eclipsing the iconic King’s College Chapel.

Apart from his two honorary doctorates and honorary fellowship, Dr Taylor has also been the recipient of many other honours including, but not limited to, the appointment as a Fellow of the Institute of Patentees and Inventors and the appointment as an Officer of the Order of the British Empire in 2011 New Year’s Honours List for his services to business and horology.

He was elected a Fellow of the Royal Academy of Engineering for his outstanding contributions to the advancement of British engineering, innovation and commerce and was awarded The Harrison Medal by the Worshipful Company of Clockmakers for excellence in horology.

In 2009, HRH the Duke of Edinburgh presented Dr Taylor with the Chancellor’s 800th Anniversary Medal for Outstanding Philanthropy to the University of Cambridge.

Dr Taylor maintains very strong affiliations with the University of Cambridge today and both instigated, and funded in perpetuity, the first Professorship of Innovation at the University’s Department of Engineering.

Manx National Heritage is responsible for protecting and promoting the Isle of Man’s natural and cultural heritage.  It is an Isle of Man registered charity and looks after some of the Island’s most special places, spaces, archives and museum collections, making these available to a worldwide audience.

Find out more at www.manxnationalheritage.im.