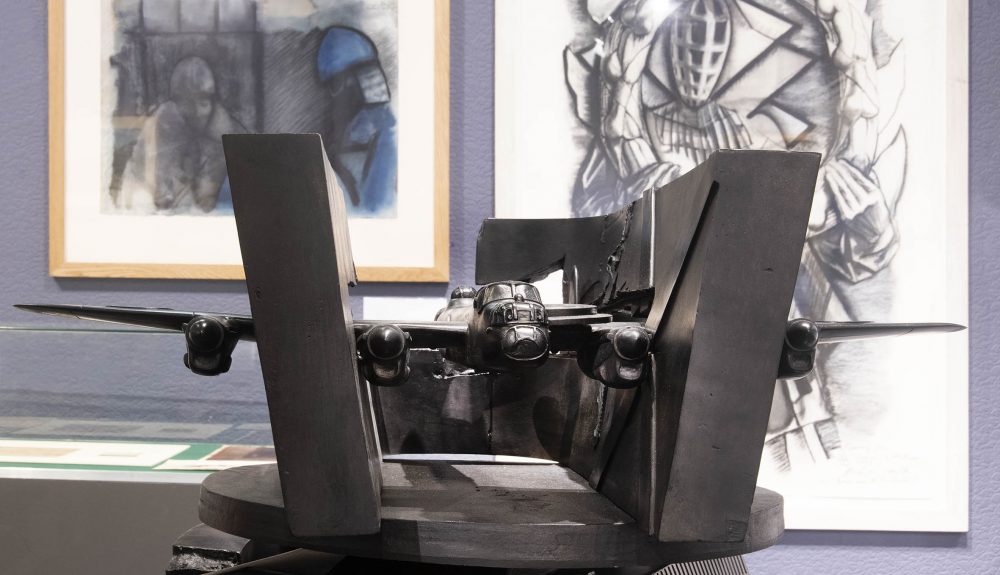 Manx National Heritage are delighted to announce that British sculptor and artist Michael Sandle RA has generously donated one of his artworks to the national art collection. He is widely recognised as one of the finest sculptors in the world.

The bronze sculpture, entitled A Second World War Memorial (1981), is a hypothetical monument to the Second World War featuring the most famous aeroplane of Bomber Command, a Lancaster. The wings of the plane are shown carving through the walls of a bunker, a pile of rubble in their wake, yet the wings remain undamaged, partially gripped but not crushed.

Michael Sandle explains a little more about the sculpture, his work and the reason for donating the piece:

“For some time now a lot of my work has reflected my thoughts about war – particularly with modern warfare which since WW1 has evolved into killing and destroying on an industrial scale.   I put this down in part to having experienced the Blitz on Plymouth as a small child. I did not experience any hardship or terror but could pick up my mother’s anxiety as we ran to the air raid shelters.  What really burnt into my psyche was seeing a City in ruins and I feel that is why Aerial Warfare often crops up in my drawings and sculptures.

Also as a reasonably thoughtful human being it would be difficult to not be affected by the awfulness of deliberately bombing civilians.  The sculpture ‘A Second World War Memorial’ is exactly about that.

This work has long been on loan to Manx National Heritage and as an expression of gratitude for having the extraordinarily good luck to have been brought up on the Isle of Man after the horrors of the Blitz I decided to give it to the Manx Museum.  This decision was influenced by the fact too that I am really quite old now and I wanted a good home for one of my most important works”.

A Second World War Memorial joins a number of other artworks by Michael Sandle held in the national art collections, which include an etching, drawings and a second sculpture Mahnmal (Memorial). A Second World War Memorial is currently on display in the National Art Gallery at the Manx Museum. It has recently been beautifully re-patinated by Michael and talented local sculptor Rob Jones.

“I first met Michael in 1998 when we held an exhibition of his drawings, prints and paintings, co-curated with the Isle of Man Arts Council.  It’s safe to say I was slightly terrified of the man himself and of the work he brought with him to the Island. It was the magnificent force of both that had this rookie curator quaking.

In conversation Michael shared just how much time he spent at the Manx Museum as a boy in the 1950s and how he took inspiration from his predecessors such as Archibald Knox and Frank Mowbray Taubman. The national art collection has benefitted hugely from Michael’s generosity in making this donation, as have the people of the Isle of Man who can rightly be proud to have his work in their national collection”.

Michael Sandle was born in Weymouth and moved to the Isle of Man in 1942, after their family home was bombed during the Second World War. His father served in the Royal Navy and his father had been stationed on the Island.  Sandle studied at the Douglas School of Art from 1951 to 1954. He left the Isle of Man in 1954 serving two years National Service in the Royal Artillery, during which time he was also able to attend evening classes at Chester College of Art. Sandle later studied printmaking at the Slade School of Fine Art, London for three years followed by a period travelling in Europe.

Sandle has taught in various art schools and universities in Britain, Canada and Germany and from 1980 was the Professor of Sculpture at the Akademie der Bildenden Kunste, Karlsruhe, Germany. He has now retired from teaching and lives in England.

Sandle’s early work is considered to emphasise craftsmanship and the search for symbols. This has not changed, but the scale and monumentality of his works has dramatically increased over the past 40 years. Sandle’s sculptures and prints, although radically different in size and medium, often reflect similar themes of war, death, destruction, inhumanity and media manipulation. Often these themes are seen to their greatest and most dramatic effect in his public commissions, for example the Memorial of the Victims of a Helicopter Disaster, Mannheim (1985) and the architecture and sculpture for the Malta Siege Memorial (1989-93). This was a vast project which included not only a major figurative sculpture, but also a thirteen-tonne bronze bell.

The often violent military images found in Sandle’s work are not intended to glorify war but to highlight what the artist sees as ‘the heroic decadence’ of capitalism, in particular its appetite for global conflict. His art attacks the media for its packaging and sanitising of the destructiveness of war. This sense of outrage was illustrated in 1986 by his production of the Belgrano Medal – a Medal of Dishonour, a bronze medal depicting Margaret Thatcher as a death’s head labelled ‘Shameless Empress’. 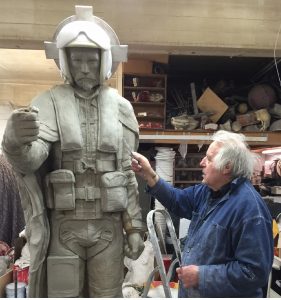