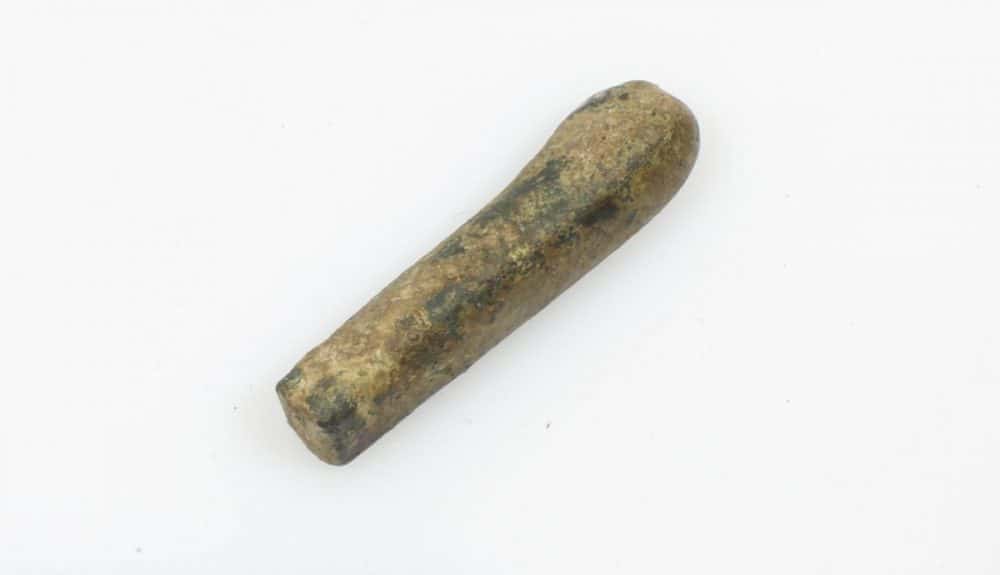 Viking Ingot Declared Treasure
Today, a small piece of Viking Age silver was declared Treasure by the Isle of Man Coroner of Inquests, Mrs Jayne Hughes. First discovered in September this year by metal detectorist Lee Morgan, the ingot dates to between AD 950 and 1075. The ingot had been cut and then at some stage lost or buried in the ground.

Allison Fox, Curator of Archaeology for Manx National Heritage said; “
“Ingots like this were used in the Viking world for trade. The ingots were weighed and tested to make sure of their silver content and they were used in part or in whole to buy whatever a Viking needed. It was a cross-border currency – if a Viking was in a place that valued silver, ingots could be used. During the later Viking Age, ingots were used alongside coinage. This ingot may only be a small artefact, but put into context, it helps illustrate how the Isle of Man was a part of the international Viking trade network 1000 years ago.”

Manx National Heritage would like to thank the finder and the landowner for their assistance and support throughout the Treasure process. The ingot will go on display at the Manx Museum, Douglas until early February. The ingot will then go to the Treasure Valuation Committee in London to be valued.

The Isle of Man in the Viking Age
Vikings arrived on the Isle of Man in the 800s, firstly trading and eventually settling. The Vikings were a maritime people, and the position of the Island right in the centre of the British Isles meant that it was perfect as a base. Silver was the main currency for trade, in the form of ingots, jewellery and coinage, and a relatively large number of silver hoards have been found on the Island. The Manx Viking legacy is still very evident, not least through the modern parliament, Tynwald, which has its roots in this period. There is still plenty of Viking influence to be seen in the landscape, with castles, burial mounds and settlements all visible. Many spectacular artefacts from the Viking Age on the Isle of Man can be seen in the Manx Museum, Douglas.

Treasure Legislation
When finds of archaeological artefacts are made on the Isle of Man there is a legal requirement to report them to Manx National Heritage. If the artefact falls under the categories in the Treasure Act 2017 (which include being at least 300 years old and having a metallic content of at least 10% precious metal), the find must also be reported to the Coroner of Inquests. The Coroner will decide whether or not an artefact is “Treasure”. If the find is declared to be Treasure, a financial reward is usually paid to the finder and landowner.

For more information on the Treasure Act 2017, please copy and paste the following links;