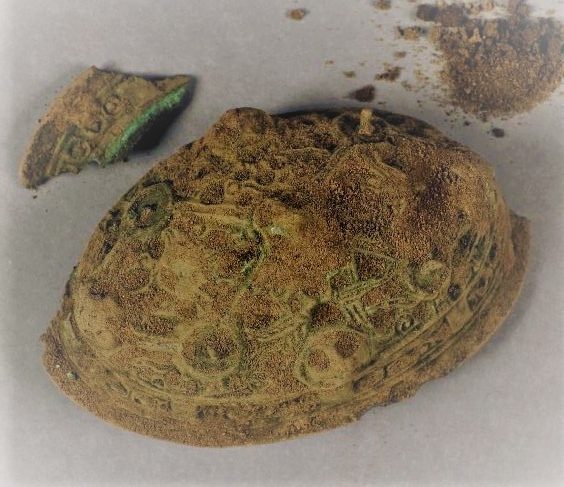 Today, a collection of Viking Age finds was declared Treasure by the Isle of Man Coroner of Inquests, Mrs Jayne Hughes.

First discovered in December 2018 by metal detectorists John Crowe and Craig Evans, the finds include two highly decorated oval brooches, made from bronze with silver wire decoration and most likely gilded, dating to around AD 900-950. The brooches would have been worn by a woman of some status.

“The Isle of Man has a rich Viking heritage and the Manx National Collections reflect this.  But, this type of brooch, worn by Scandinavian women in the Viking Age and usually found in graves, has been missing so far.

In addition to the brooches, there was also one decorated glass bead made in Ireland and a belt with bronze fittings, most likely made in the Irish Sea area, so although proud of her Scandinavian roots, this particular pagan lady also wore local fashions.

Oval brooches are particularly common in the Viking homelands, and are seen almost as national dress, showing that the wearer was most likely of Scandinavian origin.  The absence of this type of brooch from the Island before now has led to theories that it was only the men from Scandinavia that settled on the Isle of Man in the early Viking Age”. 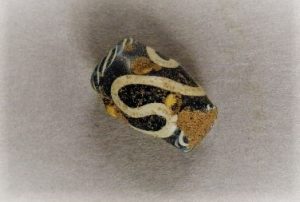 Viking Age Glass bead, made in Ireland discovered on the Isle of Man.

As artefacts like this are often found in graves, MNH commissioned a targeted archaeological excavation of the find site to establish whether or not there were any other remains present.  Archaeologists from York Archaeological Trust (YAT) conducted a small excavation on site but no grave was found.

“Crucially, after John and Craig found the brooches, they did exactly the right thing and brought them to the Manx Museum without cleaning any of the soil from the outside or the inside.  This is so important because the brooches are quite fragile and because there might still be small fragments surviving of the textiles from the clothes the woman was buried in.”

As the brooches need specialist examination and conservation, they are currently with conservators at York Archaeological Trust.

“Having been safely stored in our state-of-the-art conservation lab throughout the lockdown, we now look forward to working with Manx National Heritage in investigating and conserving these brooches using the expertise and great care our reputation is built on.”

Oval brooches were used as decoration but also to hold together an outer dress, similar to a pinafore.  They were attached to the shoulder and the front of the dress.  A necklace with beads and/or metal decoration may have been worn between the two brooches.

Manx National Heritage would like to thank the finders and the landowner for their assistance and support throughout the process.

The Isle of Man in the Viking Age

Vikings arrived on the Isle of Man in the 800s, firstly trading and eventually settling.  The Vikings were a maritime people, and the position of the Island right in the centre of the British Isles meant that it was perfect as a base first for trade, then for settlement.  A number of Viking Age burials have been found in the Island, both male and female.  The earliest ones were buried in the pagan tradition with grave goods.  The Manx Viking legacy is still very evident, not least through the modern parliament, Tynwald, which has its roots in this period.  There is still plenty of Viking influence to be seen in the landscape, with castles, burial mounds and settlements all visible.  Many spectacular artefacts from the Viking Age on the Isle of Man can be seen in the Manx Museum, Douglas.

When finds of archaeological artefacts are made on the Isle of Man there is a legal requirement to report them to Manx National Heritage.  If the artefacts fall under the categories in the Treasure Act 2017 (which include being so closely connected with Manx history and national life that their loss would be a misfortune, and/or being of outstanding significance for the study of any branch of Manx art, learning or history) the find must also be reported to the Coroner of Inquests.  The Coroner will decide whether or not an artefact is “Treasure”.  If the find is declared to be Treasure, a financial reward is usually paid to the finder and landowner.

For more information on the Treasure Act 2017, please follow these links: