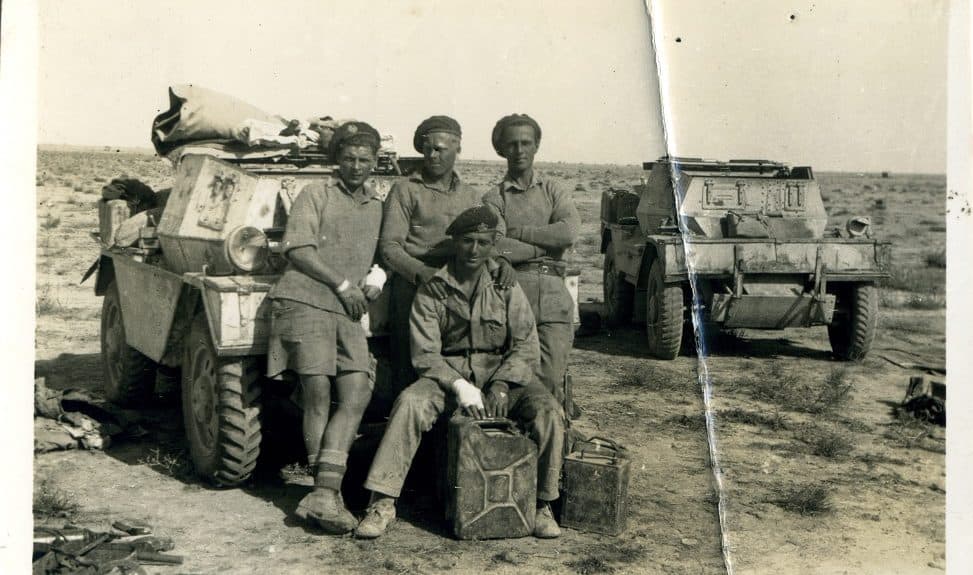 Hector Duff was born at Kirk Michael in 1919. In his early years he worked for the Isle of Man Railway Company, before joining the army following the outbreak of the Second World War. He was posted to the Royal Gloucestershire Hussars, an armoured regiment, in the North African campaign. It was here that he was awarded the Military Medal for bravery. Newspapers at the time recorded that he told his mother about it in a letter, saying only that it was ‘for some reason or other’. His enormous modesty stayed with him for the rest of his life and though he was happy to talk about other aspects of his wartime service, he would never discuss that. In fact, official records state that “Corporal Duff displayed great coolness and initiative on this occasion” adding that his conduct was “an outstanding example of devotion to duty and disregard for personal safety.”

After service in Italy, his unit was withdrawn to prepare for D-Day. They were under no illusions as to what to expect, remembering later that Monty had told them he wanted to put his best batsmen onto the pitch first. His memories of D-Day remained vivid until the end of his life, recalling in an interview: “There was all sorts of carnage of war, our vehicles, jeeps and a lot of Bren gun carriers, and an awful lot of German gun positions that had been over run. And hundreds of bodies, literally, in the sea and all the way, hundreds of bodies everywhere.”

Later on, he took part in the breakout from the Normandy beachhead, being wounded when his tank was hit by enemy fire. After the war he began a new career as a policeman, reaching the rank of sergeant. Following retirement he became a driving instructor, many Manx teenagers of the 1970s recalling that he used the watch he had recovered from the El Alamein battlefield to time his lessons.

Like many ex-servicemen, he was motivated by the memory of those who did not return from the war to ensure that they were not forgotten. He was tireless in helping teachers in Manx high schools, by joining classes to talk about his experiences. Even into his 90s he was regularly to be found on a freezing November day selling poppies, and he earned the respect and gratitude of Tynwald for his work on behalf of the Royal British Legion. When Manx National Heritage opened the Mann at War gallery, with characteristic modesty he was delighted not that we had featured him on a display panel, but that we had placed his picture next to that of Major Robert Henry Cain VC, a man he remembered fondly from ex-service reunions, and someone he regarded as a true hero.

In his role as a member of the Isle of Man Government Preservation of War Memorials Committee, Hector played an important part in surveying, collecting and depositing with Manx National Heritage, valued information about the Isle of Man’s war memorials. The resulting Isle of Man Register of War Memorials, records the history and condition of 223 war memorials and the 13,555 names they commemorate. It is no small part of Hector’s legacy that the care of these memorials will long continue and by so doing, immortalise the sacrifice they represent.

“I spent quite a lot of time with Hector when I had the privilege to chair a Government working group from 2014 to 2018 commemorating the centenary of World War One. Hector was a passionate supporter of keeping the memory alive of all who served and died in conflict. He was modest but rarely took “no” for an answer. He was a great friend to MNH and we will all miss him dearly”.

Image caption: Hector Duff (seated) in the Western Desert with three comrades, around the time of his Military Medal award.