TRADERS OF THE LOST ARTS EXHIBITION AT THE HOUSE OF MANANNAN 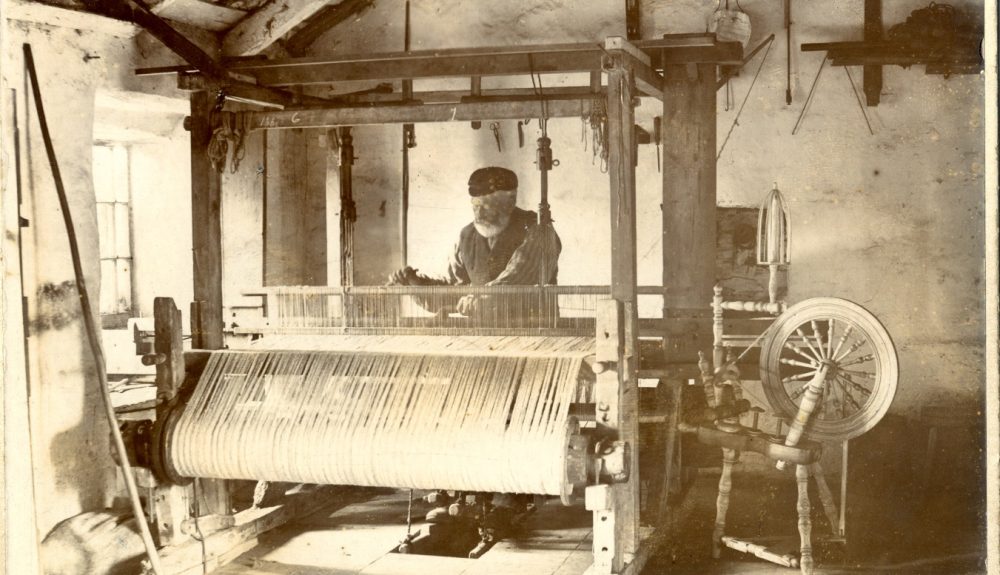 Manx National Heritage (MNH), the registered charity responsible for the care and promotion of the Isle of Man’s natural and cultural heritage are proud to launch ‘Traders of the Lost Arts’, a new exhibition in the House of Manannan Exhibition Gallery, which celebrates and showcases the traditional crafts and skills of the talented tradespeople who were once such an essential part of everyday rural life on the Isle of Man.

In this latest MNH exhibition, the objects created, the tools used to craft them, the images of the tradespeople who crafted them and the people that used them, will be on display alongside their memories and the stories of this era of Manx life.

MNH Assistant Curator, Nicola Tooms, has curated the exhibition and said of it:

“The objects associated with the Island’s craft workers were often beautiful in form, even though they were primarily concerned with practical use or function rather than aesthetics. Skills were passed from one generation to the next, often within the same family, resulting in several generations of craft workers who kept traditional patterns and forms in the objects they created. Their tools, which were greatly valued, were usually made by the local blacksmith and wood turner or carpenter, and were also handed down from one generation to the next.

As the traditional rural way of life on the Island changed to a more urban one, the skills of the once essential traders, the blacksmith, the thatcher, the wood turner, the hedge builder, and others, were forgotten, their tools left to rot and rust, and the old hand crafted items discarded or replaced with new. However, here on the Isle of Man, we were fortunate that a dedicated group of Folk Life collectors undertook to record as much information as they could, including interviewing the older generations and saving the objects before they vanished forever.”

The objects on display have been collected since 1922, when the Manx Museum opened with the aim of conserving items that relate to the Isle of Man and Manx life.  The idea of collecting memories of Manx traditional life began later, when in 1938, the Director of the Manx Museum was inspired by the work of the Irish Folklore Commission and its collecting of ‘folk-memory.’

In 1948 the Irish Folklore Commission visited the Isle of Man to record the remaining speakers of the Manx language. It made 26 double-sided 12 inch discs of conversations, hymn readings, and recitations from more than a dozen native speakers. The recordings highlighted the Island’s wealth of folk-life material, and cemented the idea of conducting a Manx Folk-Life Survey, with the aim to ‘record as much as possible of the life and crafts of the Manx community before the present century’.

The Manx Folk Life Survey built up a picture of Manx traditional life, gathered a mass of previously unrecorded information about buildings, crafts, tools and utensils, agriculture and fishing, dress and ornament, customs and beliefs, together with details of the people then alive and the incidents in their life.  It drew an important distinction between folk-life and folklore, the former being very clearly what it aimed to collect:

‘Folklore deals with the spiritual side of life – with beliefs and customs that give a certain religious and magical significance to the acts and objects of everyday life. Folk-life, on the other hand, directs one’s attention not only to these beliefs and practices but to the normal occupations and material equipment of life.’

The Manx Museum’s approach was revolutionary.  At a time when museums across the water were collecting antiquities and curios from far off lands, the Manx Museum recognised the importance of the lives of ordinary people on the Isle of Man.

“This exhibition is possible because of the work of the Irish Folklore Commission, Manx Museum and voluntary collectors almost a century ago. The detailed information they gathered, the old `unwanted’ objects they saved and the photographs they took are an invaluable source of information about the traditional skills, crafts and lives of the ordinary people living on the Isle of Man over a hundred years ago”.

Traders of the Lost Arts is on display at the House of Manannan from Saturday 23 October 2021 to September 2022.  Admission is free, donations to support Manx National Heritage in continuing the care and promotion of the Island’s natural and cultural heritage are needed and welcomed by the charity (Isle of Man registered charity no. 603).