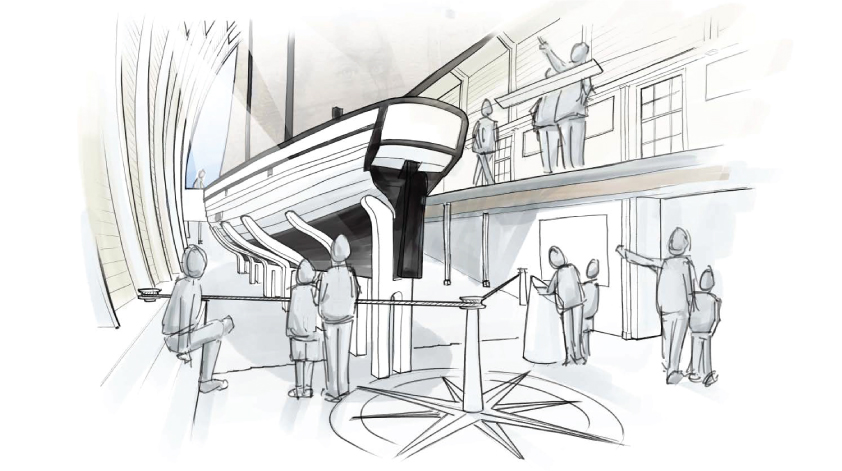 More details about ambitious plans for a vibrant new visitor experience in the south of the Island, including the relocation of the Peggy back to Castletown, are now available online.

Manx National Heritage has published an updated Q&A document on its website to keep the public informed about progress of a project designed to highlight the story of the Peggy and her owner/designer within the context of the Island’s wider maritime history.

Concept visuals of what the redeveloped Nautical Museum could look like can also be seen, displaying views from the Quarterdeck, Quayside and Bridge Street alongside computer-generated impressions of the proposed environmentally controlled boathouse and retail area.

The updated Q&A document and selection of visuals, depicting the recommended option for development of the Museum, can be viewed at: Nautical Museum Questions & Answers Jan 2022; Nautical Museum Concept Visualisations 2021

It all forms part of a £5 million redevelopment scheme as Manx National Heritage aims to deliver a refreshed interpretation, creating a memorable experience for locals and visitors alike.

In November, Manx National Heritage published a report on the future strategy for the Peggy, her new boathouse and the story of George Quayle – the prominent politician and bank owner who built the vessel.

‘The Nautical Museum and the Peggy are irrevocably interconnected and interdependent in terms of their heritage values and significance. A powerful and compelling authenticity lies in the story of George Quayle, the Nautical Museum and life in Castletown and the Isle of Man in the late 18th and early 19th centuries.

Our vision for the site is ambitious but wholly appropriate, accommodating the Peggy in a suitable manner in stable conditions and sharing her unique story, as well as that of her owner and 18th century Isle of Man in a way that marks it out as a world class all-weather heritage visitor attraction that the Island can be immensely proud of, showcasing one of its most significant items in Manx National Heritage’s care.

Ultimately, we are striving to create an accessible and immersive environment which will engage with a diverse demographic and allow visitors to journey through the original buildings and encounter the spectacle of a fully-rigged Peggy beautifully and atmospherically displayed in a contemporary purpose-designed gallery.’

A report which explores options for the relocation of the Peggy back to Castletown is being laid at this month’s Tynwald sitting.

Over the coming months Manx National Heritage will also work on a fundraising strategy, with a view to raise funds and secure financial support in partnership with its sponsoring Department (Department for Enterprise).

The Peggy is the oldest complete vessel on the UK National Register of Historic Vessels whose fleet are assessed for significance based on their age, design innovations, historical associations, level of originality, condition and rarity.

‘The uniqueness of the Peggy is clear which is why we are committed to returning her to Castletown and ensuring such an internationally important vessel is the centrepiece of the Nautical Museum,’ Connie continued.

‘Castletown already has a concentration of heritage attractions, including one of the best-preserved medieval castles in the world. The development of a world-class, fully accessible visitor experience at the Nautical Museum will add to the town’s attractiveness as a destination, adding significant value to the wider visitor economy and increasing its appeal for further investment.’

‘As residents of the Isle of Man, we all have a stake in creating the best visitor experience which will lead to enhanced facilities for ourselves and a stronger Island economy.

These proposals from Manx National Heritage match the ambition of Visit Isle of Man as we strive to better understand and serve the tourism sector, championing the Island as a great place to visit and a destination which puts the visitor first and supports the growth of other key sectors in the industry. We all want the economy to thrive and this proposed new visitor experience is exactly the type of project we wish to support.’

Editors notes: Internationally, Peggy is one of the world’s oldest surviving boats and the only surviving example of a small wooden yacht once found in their thousands around the western British Isles.

The preservation of the Peggy began in 2015 when she was carefully removed from the boat cellar of the Nautical Museum in Castletown to be stabilised, studied and conserved.

The full George Quayle Legacy Report to Tynwald and Statement of Significance is available on the Tynwald website here: