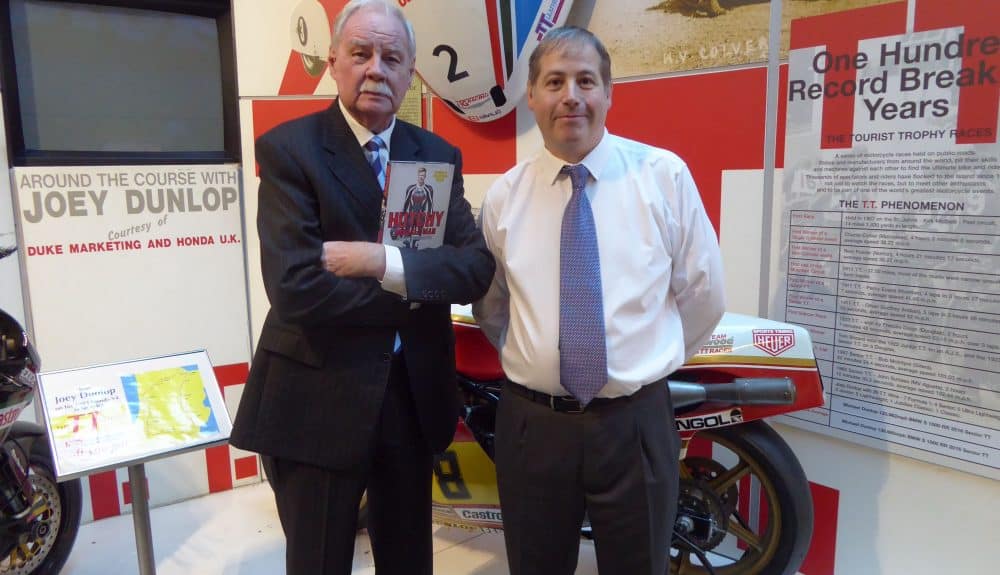 Ted Macauley – Daily Mirror journalist, motorsport author and former manager of the late Mike Hailwood – made a special visit to the Isle of Man today to record his memories of working with the road racing legend famously known as ‘Mike the Bike’ .

Mike Hailwood is considered to be one of the greatest legends of the TT, having won a record-breaking 14 races in the 1960s and 1970s, and is still a hero to a generation of fans. He was born in Oxfordshire in 1940 and his father, a pre-war racer, owned a large motorcycle dealership. Hailwood began racing at 17 and showed huge natural ability. He rode for both Honda and MV Agusta, winning nine World Championships. Hailwood’s TT career began in 1958, the highlight being the 1967 Senior race against Agostini, which he won after a thrilling battle. Following a period in car racing, he returned to the TT in 1978 and made a triumphant comeback with victories in the 1978 and 1979 races. He was tragically killed in a car accident with his daughter in 1981.

Ted Macauley is famed as the man responsible for Hailwood’s 1978 TT return, and is a familiar name in the world of road racing. He arranged sponsorship, machines and ACU clearance for Hailwood to return to the Isle of Man stage.  This astonishing comeback is often described as pure ‘Boy’s Own’ stuff.

“It is an absolute honour for MNH to welcome Ted. His connection to Mike Hailwood put him at the dead centre of one of the greatest dramas in the 110 year history of the TT, and to have captured Ted’s perspective on this fascinating episode was hugely rewarding. This is very much about adding depth to our collections and displays.”

The recordings will feature in a new TT Gallery at the Manx Museum, set to open in 2020.

Whilst on the island, Ted took the opportunity to promote his latest project; the launch of Ian Hutchinson’s autobiography ‘Hutchy: Miracle Man’.

The book tells the extraordinary story of Ian Hutchinson, an immensely determined road racer, whose sheer will to overcome adversity following a serious leg injury sustained at Silverstone in 2010 was later rewarded by renewed success at the International road races on the Isle of Man.

Co-authored by Ian Hutchinson and Ted Macauley, the book is a gripping read, one that truly captures the sheer determination of a rider, who since first visiting the TT Races in 1997, has become a leading light at the world’s most famous road race.