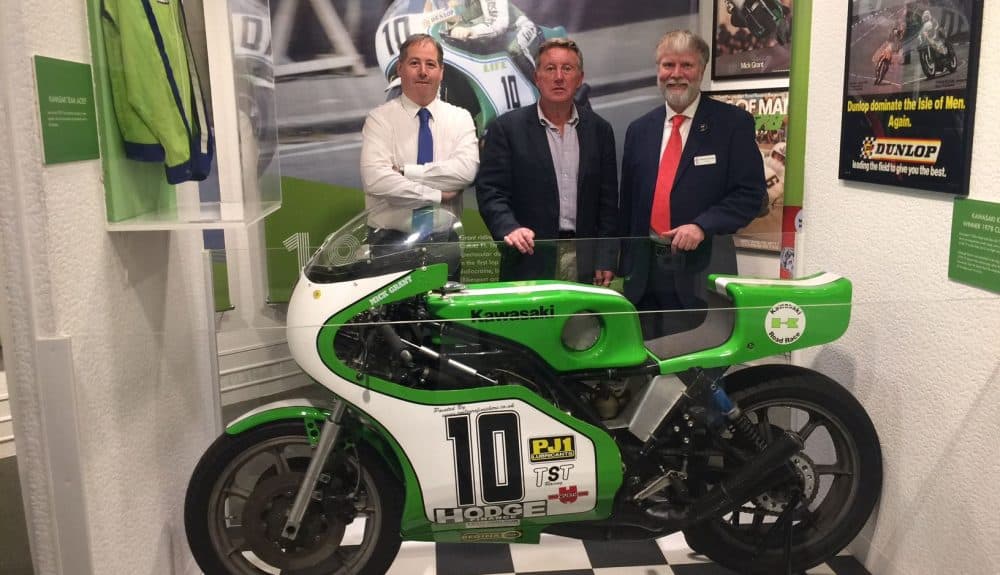 A new exhibition celebrating the TT career of 1970’s TT racing star Mick Grant has opened at the Manx Museum.

Mick Grant was one of the biggest names in British motorcycle racing, usually riding number 10. Riding for the Kawasaki race team, he dominated the Isle of Man TT, and on British Short Circuits he was the only serious challenger to the supremacy of Barry Sheene.  He also rode at Daytona and in a host of motorcycle Grand Prix.

Born in Wakefield in 1944, Mick Grant was the son of a miner. He first rode a motorcycle at the age of 11 in a field behind his family home.  From then onwards, he was hooked on racing.  Commenting on the Isle of Man TT, Mick Grant said:

“I just had to race on the Island…There was a magical ring to the place and I felt I had to go”.

Mick Grant’s first Isle of Man meeting was as a privateer on a Velocette at the 1969 Manx Grand Prix. His early results were modest.  Initially sponsored by Jim Lee, he wore ‘JL’ on his helmet and maintained this for rest of his racing career. He secured an early works ride for John Player Norton, but his first major success in the Isle of Man was aboard the Triumph ‘Slippery Sam’, with which he took the 1974 Production TT.

As Grant was coming to the attention of the motorcycling world, Kawasaki UK were planning a major racing campaign to raise the profile of the Kawasaki brand. Grant became an official Kawasaki rider on 1 January 1975.  His trademark number 10 became indelibly associated with the colours of Kawasaki and the legend of the ‘Green Meanie’ was born.

Grant took an amazing victory in the 1975 Senior TT. In the same week, he shattered Mike Hailwood’s outright lap record, which had stood for eight years, recording a speed of 109.82mph aboard a 750 Kawasaki in the Classic TT. He won the 1977 Classic and was clocked through the speed trap at Creg ny Baa at an astounding 191mph.

In 1981, Grant signed for Suzuki, and took victory in the Senior TT, as a result of the win he landed an ongoing contract with Suzuki.  He took his final win in the 1985 Production TT, later taking over the management of the Suzuki GB race team, bringing on the talented Jamie Whitam, securing sponsorship from Durex and racing as Team Durex Suzuki.

In his racing management career, Mick helped set up bikes for David Jeffries, Adrian Archibald and Jim Moodie. He has also worked with Steve Plater, Chris Vermullen and Craig Jones, amongst many others.

In recent years, he has become involved in the revival of Norton. Stuart Garner, Chief Executive Officer of Norton commented:

“To be able to get such experienced talent like Mick is a real coup for Norton”.

‘Super 10: Mick Grant The TT Years’ pays tribute to Mick Grant’s enormous contribution to motorsport and the history of the Isle of Man TT Races. TT-winning motorcycles, original leathers, helmets and trophies from the seven times TT winner’s own collection, along with personal photos and documents, not previously seen, are on display to the public in the exhibition.

The exhibition is open at the Manx Museum, Douglas until 2 September 2017.

Admission is free, with donations welcome to the Manx Museum and National Trust.