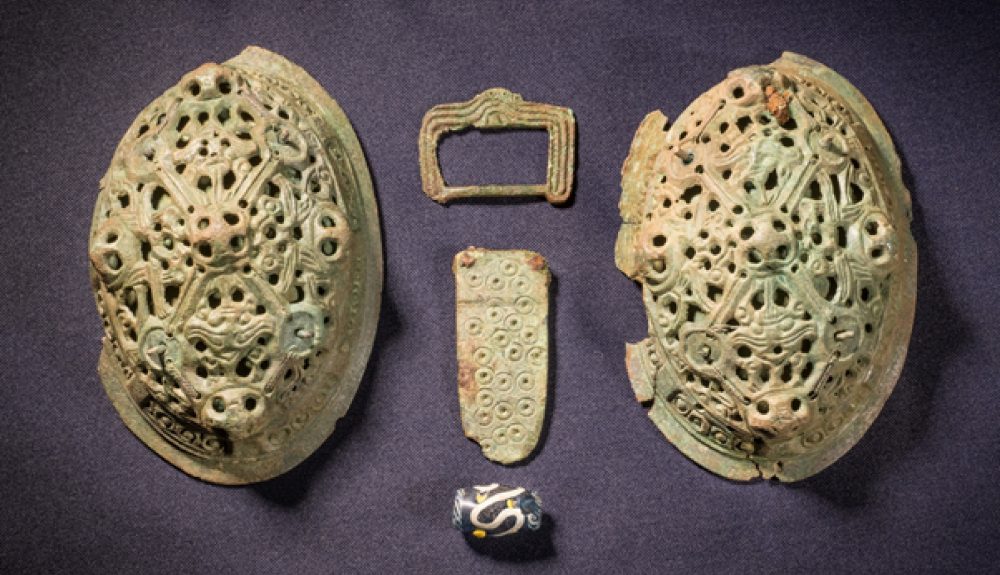 Two stunning Viking Brooches discovered on the Isle of Man in December 2018 by metal detectorists John Crowe and Craig Evans, will go on display in the Manx Museum from today, Friday 17 December. The highly decorated oval brooches date to around AD 900 – 950 and are made from bronze with silver wire decoration.    The beauty and delicate intricacy of the design of these brooches has now been fully revealed following a specialist conservation process.

The brooches were discovered alongside a glass bead and buckle, with the finds requiring specialist examination and conservation undertaken by Manx National Heritage and conservation specialists at York Archaeological Trust (YAT).  The process of conserving them started with x-rays to reveal details not visible to the naked eye. They were then cleaned, removing corrosion and soil, before coating with micro-crystalline wax to protect them.

At the time of their discovery, Manx National Heritage (MNH), the charity responsible for the care and promotion of the Island’s natural and cultural heritage, commissioned a targeted archaeological excavation of the find site, to establish whether any burial remains were present.  Archaeologists from YAT conducted a small excavation on site but no grave was found.

“John and I knew straight away that our discovery was very special, and it’s great to see the brooches cleaned and conserved”.

“It’s very rewarding that they are now on display at the Manx Museum, for everyone to see and enjoy”.

“Restoring the MNH artefacts has been a process that has used all the key skills of our specialist team here at YAT, revealing the beauty of these unique, delicate objects from conditioning through to careful packaging for transportation to the Isle of Man, so that they can be displayed in their full splendour for the public to enjoy.”

Oval brooches are relatively common in Viking Age Scandinavia and are seen almost as national dress, showing that the wearer was most likely of Scandinavian origin.  The absence of this type of brooch from the Isle of Man before now has led to theories that it was only the men from Scandinavia that settled on the Isle of Man in the early Viking Age.

“The Isle of Man has a rich Viking heritage and the Manx National Collections reflect this.  This type of brooch, worn by Scandinavian women in the Viking Age and usually found in graves, has been missing so far.  In addition to the brooches, there was also one decorated glass bead made in Ireland and a belt with bronze fittings, most likely made in the Irish Sea area. Although proud of her Scandinavian roots, this particular pagan lady also wore local fashions”.

Vikings arrived on the Isle of Man in the 800s, firstly trading and eventually settling.  They were maritime people, and the position of the Island right in the centre of the British Isles meant that it was perfect as a base first for trade, then for settlement.

The Manx Viking legacy is still very evident, not least through the modern parliament, Tynwald, which has its roots in this period.  There is still a strong Viking influence to be seen in the landscape, with castles, burial mounds and settlements all visible.

The two newly conserved brooches are now on display in the Viking Gallery at the Manx Museum, Douglas, alongside many other spectacular artefacts from the Viking Age on the Isle of Man.