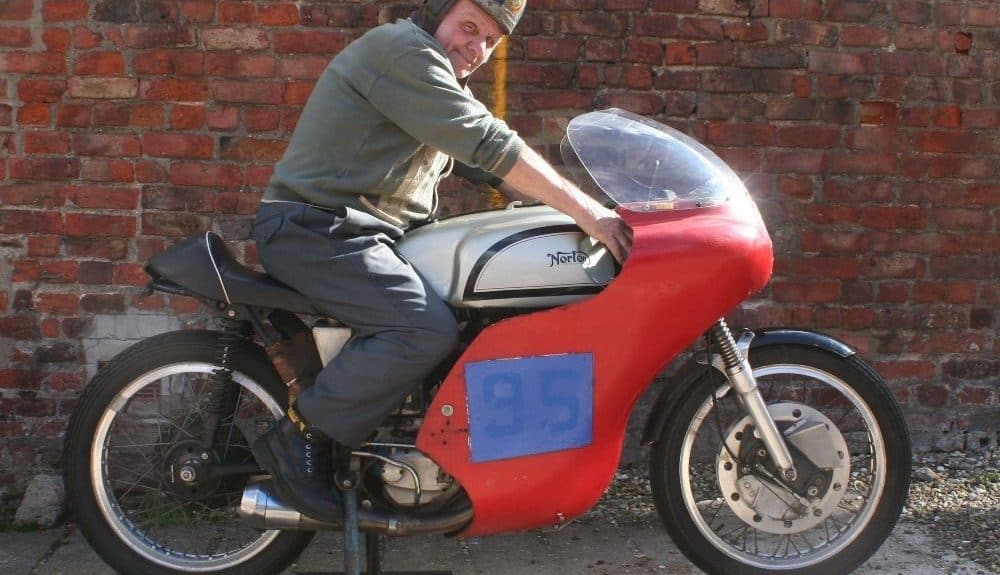 Manx National Heritage wishes to express its appreciation to the British Motorcycle Charitable Trust, for its assistance and support in securing a historic motorcycle. The machine is destined for display as part of the Manx Museum’s new motorsport gallery, planned for 2020 at the organisation’s flagship site.

The motorcycle, a 1960-built 350cc Norton Manx, was the mainstay of privateer racers and this example has an incredible 30 year history of racing on the Isle of Man’s mountain circuit.
The vendor Ben Noble, now in his 80s, purchased it from another racer in 1966 and since that time has kept a meticulous archive of receipts for work done, photographs, plus his own notes on races in which the machine competed. However, what really attracted attention of curators at Manx National Heritage was the fact that it was for sale in completely ‘as raced’ and unrestored condition.

“When I first saw photos of this machine I was immediately taken with it. We have been looking for a Manx Norton in order to fill a gap in our collection for some time, and immediately I knew this was ‘the one’. It is a real old warhorse, having been campaigned at the TT and Manx Grand Prix almost every year for decades. What really excited me however was the fact that no one had touched it since. Every bump, every scratch on this machine is part of its history. It even still has hessian sacking tied around the frame to stop leaking oil splashing on to the back wheel.”

An e-mail to the British Motorcycle Charitable Trust quickly confirmed the view that this was an exceptional machine from the point of view of condition, and the trustees of the organisation were quick to pledge financial and practical assistance. Two members travelled with a van to attend the auction near York at which the machine was offered.

Ben Noble was in attendance at the sale, and was happy to answer questions about the machine and its history. When the auctioneer’s hammer fell it was announced that the machine was destined to be displayed in the Manx Museum in the Isle of Man. Despite some fierce bidding the outcome was received by a spontaneous round of applause, and that same evening the van was booked on a sailing to the Isle of Man.

“We are incredibly grateful for the support of the BMCT in helping us to secure this machine for posterity. There are many other Manx Nortons about, but almost invariably they have been returned to ‘factory’ condition. Here we have an example as it would have appeared on the race track, with all the modifications its owner made to it, as well as the scuffs and bumps it picked up along the way. It’s a real piece of TT history.”