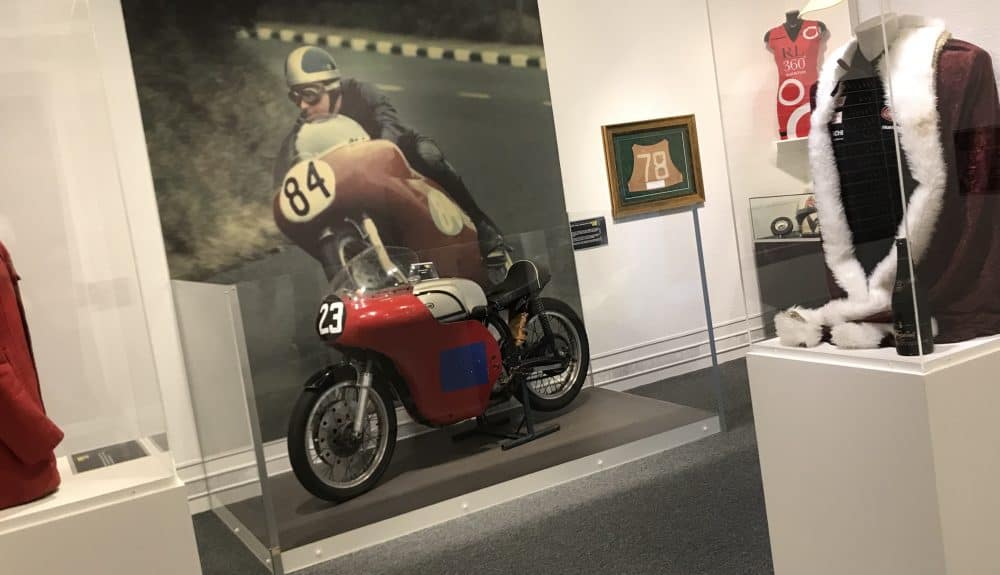 In 2020, Manx National Heritage plans to open a new permanent gallery honouring the history of the world’s most historic motorsport event – the Isle of Man TT.

Now, in advance of the new gallery, Manx National Heritage has opened ‘Racing Lines’, a special exhibition at the Manx Museum in Douglas. It offers the opportunity to discover a selection of interesting items acquired for the upcoming gallery, including the memorial urn for Karl Gall, leathers worn by David Jefferies when he shattered the 125mph barrier in 2000, and the champagne bottle with which John McGuiness toasted victory in 2007.

The exhibition was put together by Matthew Richardson, Social History Curator at Manx National Heritage, who said:

We want to give people a sneak preview of the sort of things that they will see in the new gallery, but our work is not yet complete. We would also like the public’s help in sourcing additional TT, MGP and motorcycle related objects, stories and memorabilia. We’d be very interested to hear from anyone who can help”.

In return for feedback, Manx National Heritage is offering the opportunity to win a return trip to TT 2019 with the Isle of Man Steam Packet Company for two motorcycles and two riders. Feedback and competition entry forms are available from the Manx Museum and TT Grandstand. Download competition Terms and Conditions.

Racing Lines is a free exhibition and runs from 26 May until 8 September at the Manx Museum in Douglas. Donations welcome.  For more information, visit the Manx Museum or follow @RacingLines18 on Twitter.

Image caption: 1960 348cc Norton Manx – This machine was delivered by Norton Motors direct to the Isle of Man, for use by Bill Beevers at the 1960 TT.  Later it passed to Noel Stephenson, before in 1966, it was sold to Ben Noble of Driffield.  Noble raced at the MGP for a number of years before hanging up his leathers.  The machine is in ‘as raced’ condition, still with hessian sacking attached to catch oil leaks.  The machine was acquired by Manx National Heritage with the assistance of the British Motorcycle Charitable Trust.  To the right of the image, the robes, crown and hat worn by John McGuiness as he was declared King of the Mountain in 2007.  Shown with these items is the champagne bottle with which McGuiness toasted victory after the 2007 Senior TT.  For the first time the 130mph lap barrier had been broken.