PUFFINS RETURN TO THE CALF OF MAN 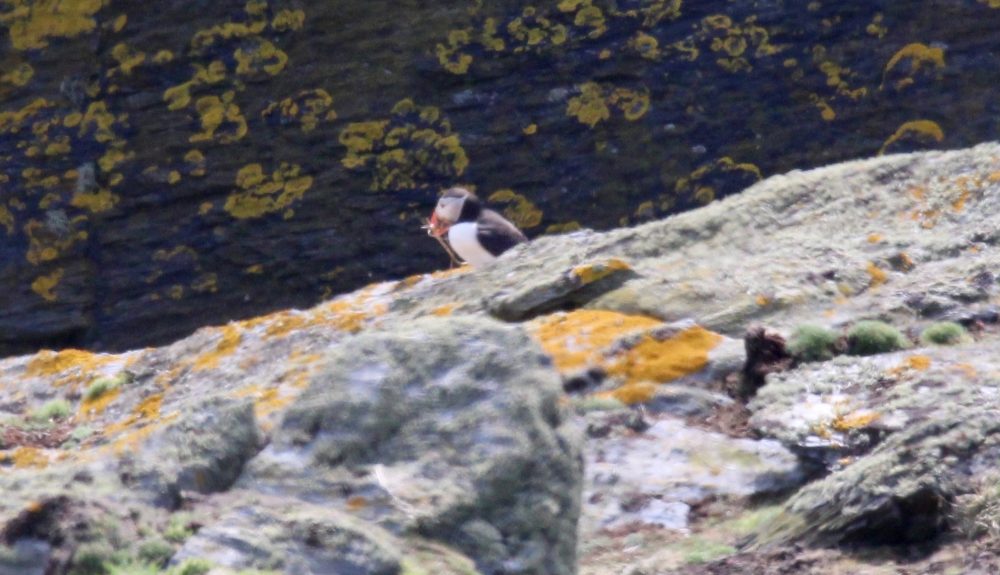 Manx National Heritage (MNH), the charity responsible for the care and promotion of the Isle of Man’s natural and cultural heritage, and conservation partners, Manx Wildlife Trust (MWT), are pleased to confirm the return of Puffins to the Calf of Man.

One method to encourage investigation by visiting puffins is to install lifelike puffin manikins as decoys. To this end, in 2015, an ‘Adopt a Puffin’ scheme was launched by MWT, where members of the public could adopt one of 100 decoy puffins to be positioned on the Calf.

In early 2016, the decoys were distributed between two sites, near the lighthouses at Kione ny Halby, a location where puffins had historically nested. Puffins tend to nest in big groups, so the decoys act as a seed colony. To help make the decoys as realistic as possible, a speaker system (kindly funded by The Manx Ornithological Society) was placed on the east coast site.  The speakers play out the sound of puffin calls to help attract the juvenile puffins in from the sea to prospect the area. It is a slow process to attract puffins since it takes 5 or more years for them to reach sexual maturity and to start prospecting for burrows in readiness for breeding.  So MNH and MWT are delighted to report early signs of potential success of this decoy colony.

On 6th July this year, a group of kayakers saw and photographed two puffins at Kione ny Halby, with one snuggling up to the decoys. Rob Fisher, Volunteer Assistant Bird Warden on the Calf of Man, went to investigate and managed to observe and photograph a puffin with nesting material in its mouth. This is a positive sign that they may be breeding on the Calf, after an absence of over 30 years. Hopefully, this is the start of many more puffins returning and we will hear their cries again, but for real this time. 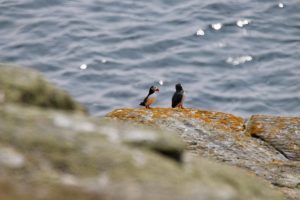 Historic accounts show that Manx Shearwater (Puffinus puffinus) were harvested in large numbers on the Calf during the 17th and 18th centuries and possibly earlier.  It is also apparent that the Atlantic Puffin (Fratercula arctica) – or Sea Parrot as it was known – was present and was also culled.   As the Puffin “harvesters” did not differentiate between the two species in their records, however, it is not possible to gauge their relative numbers at that time.

Although thousands of birds were harvested by humans, the working assumption has been that the start of the Shearwater/Puffin annihilation by the Brown Rat (Rattus norvegicus), coincided with the wrecking of a ship engaged in the “Russian trade” in 1792. The Quayle Bridge House Papers reveal, however, that the devastation of the Shearwater colonies had predated 1792 and so suggest that the shipwreck that led to the presence of Brown Rat on the Calf had occurred some years prior to this date.

On 2nd September 1786, Thomas Quayle wrote to his father John Quayle who held a lease of the Calf of Man at the time: “I am sorry to hear ye rats have committed such great Devastation on ye Calf”.  Three years later , on 14th September 1789, he wrote: “The Duchess [of Atholl] says she was very fond of the Puffins and much regrets their extermination.”

Over two hundred years later, many seabirds globally and locally have seen a sharp decrease in numbers over the past few decades and this includes the charismatic Atlantic Puffin, so much so that they are red listed on the Birds of Conservation Concern report. Along with the Manx Shearwater, as ground nesting birds they are particularly vulnerable to predation by rats, and it is believed that the Puffin last bred on the Calf in 1985.

Starting in 2012, the Manx Shearwater Recovery Project aimed to eliminate the Brown Rat and largely appears to have been responsible for a resurgence in Manx Shearwater numbers from less than 100 breeding pairs in 2010 to more than 600 breeding pairs currently.  Although the Brown Rat has not been completely eradicated, it is believed that the Project has also created favourable conditions to encourage the return of the Puffin back to the Calf too.

“We are absolutely delighted to see the Puffins return.  It’s been 30 years since puffins have bred on the Calf of Man, and through our ‘long tail’ (brown rat) eradication programme and subsequent puffin project managed in conjunction with Manx Wildlife Trust, it’s looking positive for breeding pairs on the Calf once again.

We now need your help to keep them safe.  We know lots of people will want to visit the Calf in the hope of spotting these fabulous birds but we ask that you are extra vigilant and stick to the marked paths on the Calf to help protect the puffins and the other ground nesting birds on the Island nature reserve”.

Located off the south coast of the Isle of Man, the Calf has been a bird observatory and nature reserve for over six decades.  Manx Wildlife Trust is contracted to operate the Calf of Man Bird Observatory, with seasonal ornithological and estate wardens resident on the island.

The wardens’ activities on the Calf include monitoring bird populations through bird ringing and breeding counts.   Since 1959, over 275,000 birds, of 184 species have been ringed and this data set has provided valuable information on migration patterns and contributed to our understanding of bird population changes.

Other conservation related activities include seal monitoring, moth trapping, butterfly surveys and the recording of the dragonflies and damselflies, with a total of 11 species of Odonata confirmed as occurring on the island.  Blue-tailed Damselfly and Common Darter are the most regular and numerous of those species observed. Habitat management, infrastructure maintenance and dry stone walling repair work is also undertaken.

Note to Editors: The Quayle Bridge House Papers are held in the Manx National Heritage archive and the relevant references for the Thomas Quayle letters are MS 00911/19 C and MS 00914/6 C.