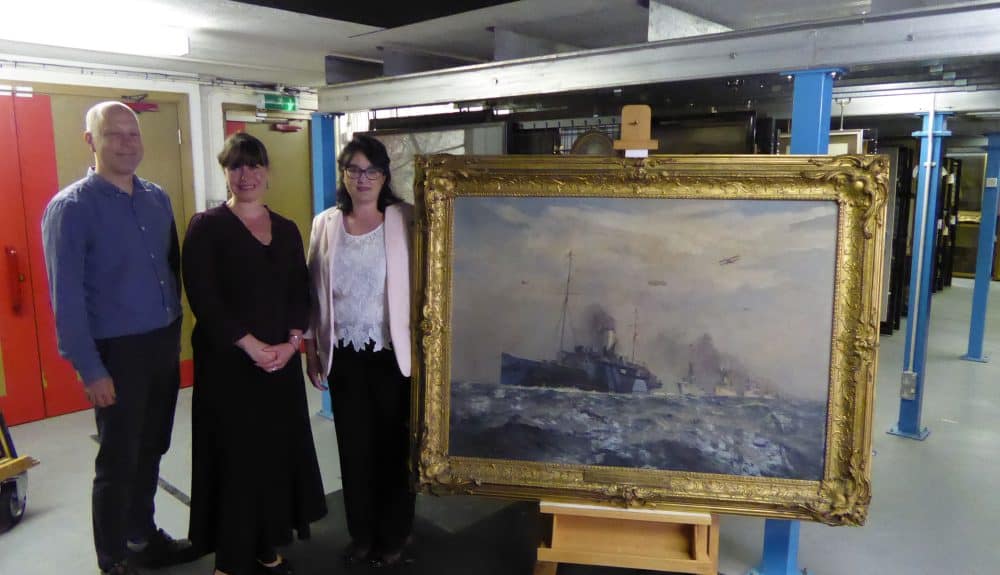 The paintings are set to go on display in a new gallery dedicated to the island’s military history, opening at the Manx Museum in 2018. The gallery will feature stories, manuscripts and objects including weapons, costumes and paintings related to the Isle of Man’s role in armed conflict.

Included in the collection is a striking oil on canvas portrait featuring Major James Spittal, a commander of the Douglas Rifles Volunteer Corps. The portrait, which dates to 1900, will be cleaned and minor damage to the gilded frame repaired by expert conservators.

“Many decades ago the painting of Robert Farrant was damaged by water, resulting in the canvas support and frame swelling then shrinking. The damage has resulted in paint becoming loose and flaking. Unfortunately, some of the damage has been poorly repaired in the past.
The flaking paint will be stabilised by injecting resin in solution. The painting will also be cleaned to remove old varnish and unsightly retouching, then filled, retouched and re-varnished. The frame, also original, requires similar treatment”.

The third painting is the magnificent ‘Surrender of the German Fleet’, painted in 1919, by Arthur James Wetherall Burgess. The painting shows the Isle of Man Steam Packet Company vessel, King Orry leading the German High Seas Fleet in to the Firth of Forth. The King Orry and her mainly Manx crew had served with the Royal Navy throughout the First World War.

The painting corresponds closely to photographs and official reports of the surrender. The long line of ships, biplanes and an observation balloon add to its authenticity. The King Orry is in her dazzle camouflage paintwork of blues and blacks (in reality, there were also yellows and reds), believed to have been designed by the naval and maritime artist Norman Wilkinson and introduced by the Royal Navy in 1917.

She flies three White Ensigns which form the traditional flag of the Royal Navy. Burgess’ meticulous attention to detail is illustrated by the Blue Ensign on HMS Phaeton which she was told to fly on special orders to the fleet, identifying her as a leading vessel.

Symbolically the King Orry, the only merchant ship amongst the elite vessels of the amassed British and German navies, is shown leading the surrender of the German Fleet. Behind the King Orry is HMS Phaeton, leading a column of seven German Light Cruisers.

“The painting was commissioned soon after the war by the Isle of Man Steam Packet Company, proud owners of the King Orry, and is on permanent loan to Manx National Heritage. We are delighted this important painting is undergoing conservation work ahead of being exhibited in the new military history gallery, where it will help tell the story of the Steam Packet Company’s role in both World Wars. We’re pleased to be supporting Manx National Heritage by assisting with the transport costs of all three artworks.”

“Having no glazing, ‘Surrender of the German Fleet’, has become very dirty over the past century, and it now requires careful cleaning.
Some of the paint has begun to degrade leaving a white deposit on the surface of the sea in the foreground that looks superficially like foam on the waves. The white deposit is caused by fatty acid salts from bitumen used as a brown-black pigment in the paint and will be carefully removed.
The surface of the painting will also be analysed, enabling Manx National Heritage to minimise further decay of the paint”.

The Isle of Man Steam Packet Company has generously supported the conservation of the three paintings by assisting with their transport to the UK for conservation.