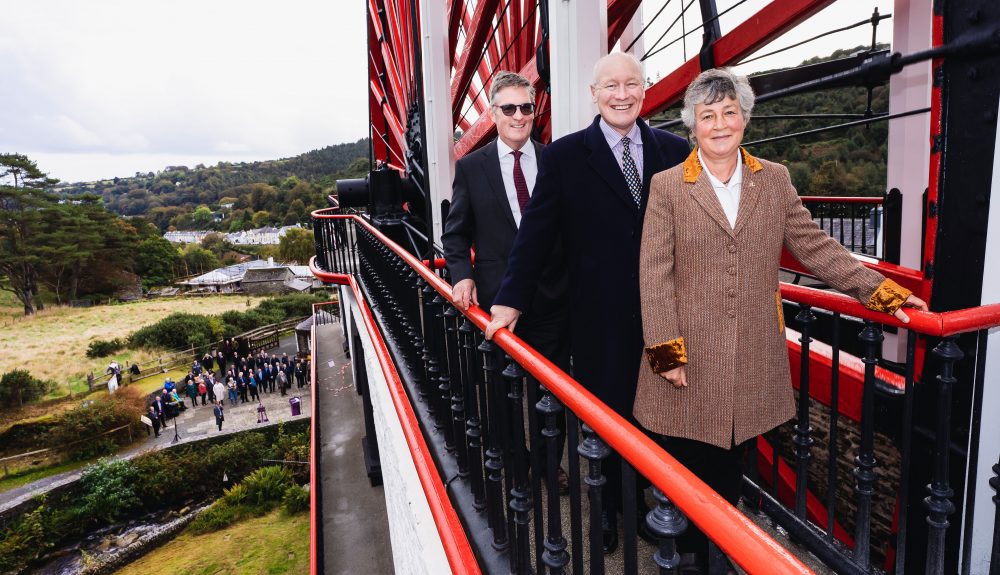 Manx National Heritage is delighted to announce the official re-opening of the Great Laxey Wheel, following a major conservation project.

The world famous treasured landmark was officially re-opened in the presence of His Excellency the Lieutenant Governor Sir John Lorimer and Lady Lorimer, who marked the occasion of the Lady Isabella’s first formal turning, following a tradition which began in 1854, when the wheel was first opened and named after the wife of the Island’s Lieutenant Governor, Lady Isabella Hope.

The re-opening event marked the conclusion of the first phase of the most comprehensive conservation project completed on Lady Isabella since her restoration almost 40 years ago.

This unique conservation project offered a rare opportunity to study and work on one of the Isle of Man’s most treasured landmarks and the largest working water wheel in the world.

“It was a proud and emotional moment when Lady Lorimer MBE started the wheel turning, entering a new chapter in the history – and the future – of the Great Laxey Wheel.  What we consider to be ordinary, is often quite extra-ordinary to others and our visitors find our heritage, and particularly the Lady Isabella, to be quite extraordinary.  The absence of the Laxey Wheel turning has perhaps reminded many people of her uniqueness and immense importance to the Isle of Man, not just as an iconic landmark and an intrinsic part of our history and heritage, but also appreciating the significant contribution she makes to today’s visitor economy and the enormous pleasure she brings to all who visit, from near or far.

We are hugely appreciative to Lady Lorimer and His Excellency the Governor, for their genuine interest in, and support for, this Conservation project throughout the year.”

Extensive Conservation work of this scale on the Lady Isabella only takes place once or twice in a lifetime and the commencement of this project marked a significant moment in, not only the history of the Great Laxey Wheel but also in our Island’s history.

The wheel’s structure was carefully studied throughout the conservation project and a new chapter in the story of Lady Isabella began as work on stone masonry, wheel housing, handrails, cladding, buckets, viewing platform and wheel structure was completed.  Old render and defective timbers suffering from decay were replaced, ironmongery repaired and the wheel, housing, railings and viewing platform re-painted.

Manx National Heritage extends thanks to Isle of Man Government, Laxey Mines Research Group, Auldyn Construction, Mannin Wood Limited, BB Consulting, Bell Burton Associates and all those who contributed to and supported the first phase of this major conservation project and investment in the Lady Isabella, protecting her for future generations to know, love and be proud of.  The Great Laxey Wheel is once again turning, turning, turning.

Designed by the Victorian engineer, Robert Casement, the Great Laxey Wheel was built to pump water from the depths of the Laxey mines using water from Glen Mooar to power the wheel. The impressive 22.1 (72.6 feet) diameter structure found immediate popularity and has remained one of the Island’s most iconic and dramatic attractions for over 150 years.

When the Laxey mine closed for the last time in 1929, the Laxey Wheel stopped and was abandoned.  In December 1937, Lonan man, Edwin Kneale, felt he could stand by no longer. Recognising the wheel’s value, and with the primary aim of saving it for future generations, he leased the wheel from its private owner and set about repairing and caring for it. Aged 32 at the time, he risked his livelihood to save Lady Isabella from demolition.

The wheel was put up for auction in October 1946, when Mr Kneale stepped in, buying Lady Isabella before the sale.  He started a complete refurbishment at his own expense, transferring ownership to the Isle of Man Government in 1965, ensuring that this important piece of Manx history and heritage was safe for future generations.

Saved for the nation, tourists flocked to the world famous waterwheel.  Ownership of Lady Isabella was transferred to the Manx Museum and National Trust and is now cared for by the Island’s heritage charity.

Edwin Kneale did an amazing thing for the Island, and we couldn’t put it better than Henley Crowe and Dollin Kelly RBV’s entry on him in ‘New Manx Worthies’:

“Today is it unthinkable that such a gem of our heritage should be allowed to fall back into the sad state it was in when Edwin embarked on saving it. For this, all Manx people have to thank that one man whose childhood enthusiasm for a local landmark gave him the determination to see that it should survive in well preserved splendour”.