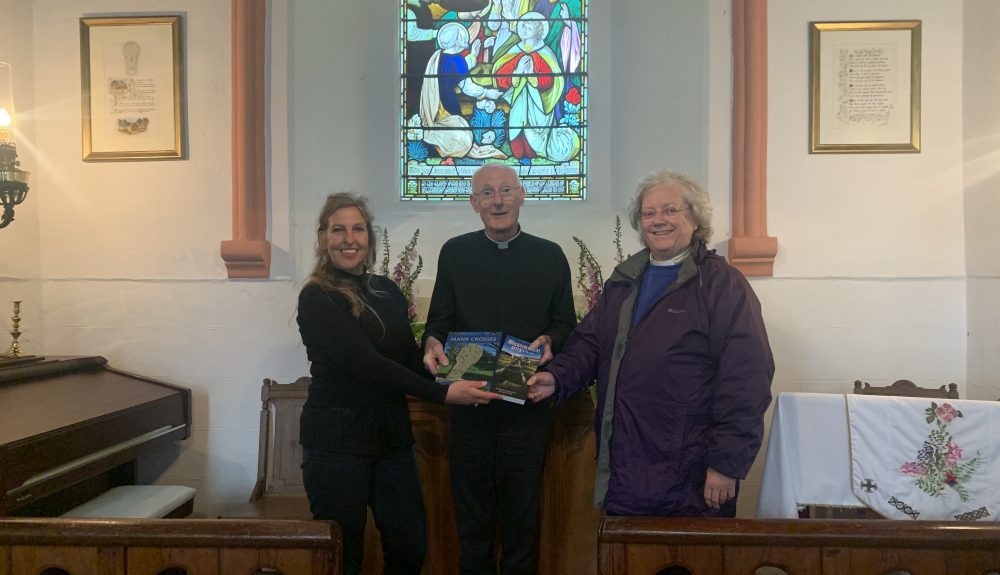 Medieval stone crosses at St Adamnan’s Church in Lonan have been brought to life thanks to new visitor information installed by Manx National Heritage and the Diocese of Sodor of Man.

St Adamnan’s or Lonan Old Church stands on the site of an earlier chapel, preserved in the memory of the Manx name Keeill-ny-Traie – the ‘chapel by the shore’ – to which it is still partially connected by old paths leading to the coast at Baldrine and Groudle. The churchyard is home to an important collection of eight medieval carved crosses, dating from the 7th – 10th centuries.

“The Manx Crosses are works of art, written documents and religious artefacts, and have an extraordinary capacity to tell us about our ancestors, the people who created them. Some of these crosses can be found in the grounds of Lonan Old Church, including an impressive wheel-headed cross slab of monumental proportions.  The presence of these memorials is one of the reasons why this was chosen as the centre of the parish almost nine centuries ago.”

The Isle of Man has one of the most significant collections of carved medieval stone memorials found anywhere in the British islands.  It is home to more than two hundred carved crosses, which range from simple grave-markers to large and intricately decorated memorials.

They were created during a pivotal period of the Island’s history, from its conversion to Christianity 1500 years ago, through the arrival of Norse settlers in the 10th century, and culminating in the re-organisation of the Church along European lines in the 12th and 13th centuries.

The simplest grave-markers carved using basic tools, and the more elaborate memorials produced by professional sculptors for wealthy clients, all reflect the faith, aspirations and resources of the people who raised them. Some may even have been painted.

As well as commemorating the dead for whom they were raised, many crosses depict figures of people, pagan gods, animals and mythical monsters, telling stories, supporting religious beliefs and expressing the mixed identity of the Manx people.

Although widespread literacy was not common in medieval society, around a fifth of the Island’s crosses bear inscriptions. The alphabets, languages and names used teach us about the beliefs and origins of the people who made these crosses: they are our only documents from this period.

“The area surrounding St Adamnan’s Church is one of the most beautiful that I have ever seen. I am so grateful to God for calling me to be the current steward of the church with the care of souls in the parish.

To tread where pilgrims of the Faith have walked for centuries is an outstanding privilege. To gaze on the handiwork of the crosses and to see that they and the Faith have stood the test of time is so affirming and reassuring in these challenging and unprecedented times.

On the 16th June 1968 an inaugural meeting was held to form the Friends of St Adamnan’s. They now, as then, support the Vicar and Wardens in caring for this building with membership drawn from across the world.

We are grateful that working together we can display information to visitors about the significance of these old crosses.  I hope it will encourage folk to enter the sacred building where they too can experience the peace of the place and I pray each will hear the voice of the Lord speaking to them in this their generation.

I hope that all who visit enjoy the surroundings of St Adamnans and take away a greater understanding of our spectacular Medieval Crosses”.

The crosses are publicly accessible in the grounds of St Adamnans.  For anyone unable to visit the churchyard, each of the Island’s crosses has been laser scanned and is available to view online on iMuseum, with further detailed information on the Island’s cross collection recently published in Manx Crosses: A Handbook of Stone Sculpture by Sir David Wilson, available from www.manxnationalheritage.im/shop.