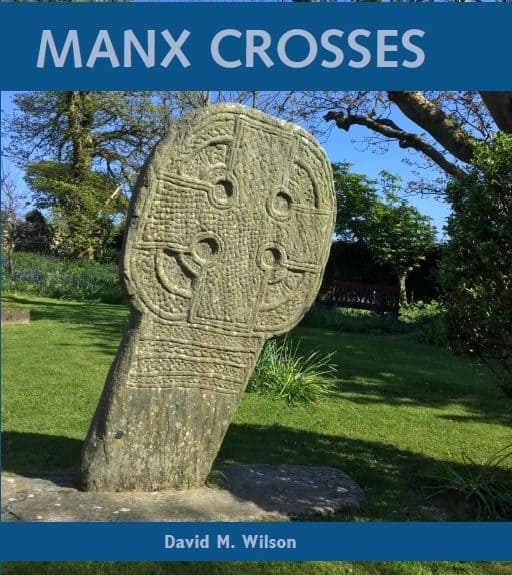 Manx National Heritage is launching a new publication about the Isle of Man’s famous collection of carved medieval stone crosses. ‘Manx Crosses: A Handbook of Stone Sculpture’ is the culmination of a lifetime’s interest in the monuments by medieval archaeologist and historian Sir David Wilson.

A former director of the British Museum, Sir David retired to Castletown in 1992, but he has a much longer association with the Island and recalls that childhood visits to Kirk Michael first stimulated his interest in the Manx crosses.

The Isle of Man boasts over 200 crosses ranging from simple grave-markers to complex carved monuments, dating from the sixth to the eleventh centuries. The crosses are displayed in parish churches across the island and at the Manx Museum in Douglas.  All of them are protected as Ancient Monuments under the guardianship of Manx National Heritage, reflecting their significance to the Island’s heritage.

Sir David begins by setting the geographical, political and religious context of the Isle of Man in the early medieval period before looking more closely at the places where the crosses were erected – namely the numerous chapels spread throughout the island and the major sacred sites at Maughold and St Patrick’s Isle.

The majority of the book concentrates on the crosses themselves, beginning with the early monuments – some with Pictish influences derived from eastern Scotland – from the 6th to the early 9th centuries.  Focus then moves on to the stones of the 9th century raised before the arrival of Scandinavian settlers, and culminates in the internationally famous examples from the 10th and early 11th centuries which display intricate interlace and figures.  A separate chapter deals with the runic inscriptions for which the later crosses are equally renowned.

‘Manx Crosses’ is much more than an art-historical account of the carved stones: Sir David also considers the social, political and ecclesiastical circumstances in which these monuments came to be made, the languages and scripts used in the inscriptions, and the reasons behind the cessation in their production in the 11th century.

The book has been edited and designed by local author and journalist, Valerie Cottle. It is illustrated throughout with more than sixty photographs and drawings, and concludes with a gazetteer listing all of the crosses and their vital statistics, an extensive bibliography and an index.

‘Manx Crosses’ will have a wide readership amongst specialists and non-specialists alike, and will appeal to anyone interested in the medieval history and the Celtic and Viking legacy of the Isle of Man.

‘Manx Crosses: A Handbook of Stone Sculpture 500-1040 in the Isle of Man’ is published by MNH and Archaeopress. Copies will be available from the Manx Museum and the House of Manannan, price £18 for paperback and £28 for hardback. Pre-order online now at www.manxnationalheritage.im.

Coinciding with the launch of the book, Sir David Wilson will lecture on the ‘Manx crosses of the tenth-century Scandinavian settlement’ at 6pm on Wednesday 21st February in the Main Hall at University College Isle of Man, Homefield Road, Douglas. All are welcome, and no booking is required. Copies of the book will be available for purchase at the lecture, please note payment will be cash or cheque only.