News›Latest News›Netflix, “The Dig” and Manx Connections to Sutton Hoo

Netflix, “The Dig” and Manx Connections to Sutton Hoo 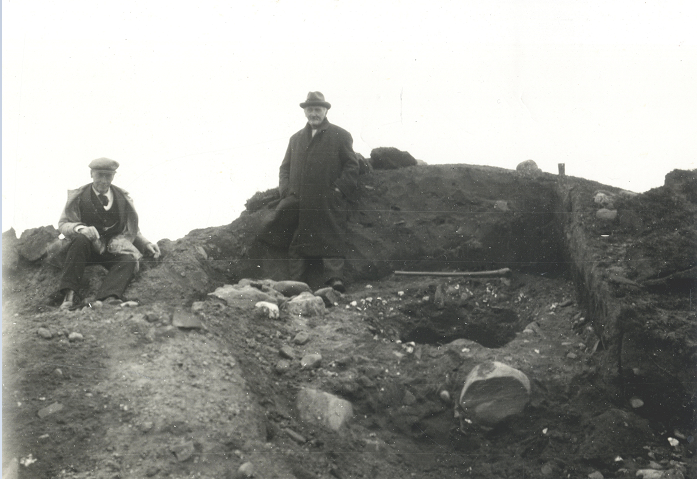 With the launch earlier this month of “The Dig”, a major Netflix film about the dramatic discovery of the Anglo-Saxon grave and artefacts in a Suffolk field in 1939, interest in the National Trust site of Sutton Hoo has surged, but did you know there’s a Manx connection to Sutton Hoo at Knock y Dooney in Andreas?

In the summer of 1937, as the spectre of World War II loomed over Europe, Edith Pretty, a wealthy widow living near Woodbridge in Suffolk, England, met with the curator of the local county museum in Ipswich to discuss excavating three mounds on the far side of her estate at Sutton Hoo.

After their meeting, Pretty hired amateur archaeologist Basil Brown, and work began the following spring. Brown was self-taught and had for several years previously been employed to carry out fieldwork by Ipswich Museum. He was a local man whose father was a farmer, and from him he had developed a remarkable ‘feel’ for the local geology and soils.

Over the next year or so, Brown, who was later joined by archaeologists from the British Museum, struck gold, unearthing one of the richest medieval burials ever found in Europe. Dating back to the early seventh century A.D., the 1,400-year-old grave – believed to belong to an Anglo-Saxon king – contained fragments of an 88-foot-long ship (the timbers had rotted away, leaving only the iron rivets) and a burial chamber filled with opulent grave goods. The British Museum, which houses the trove today, deemed the find a “spectacular funerary monument on epic scale.”

The importance of the Sutton Hoo burial cannot be understated. Not only did the site shed light on life during the early medieval Anglo-Saxon period (roughly 410 to 1066) but it also prompted historians to revise their thinking about the era that followed the Roman Empire’s departure from the British Isles in the early fifth century, which for good reason had been called the Dark Ages. Contrary to long-held beliefs that the period was devoid of the arts or cultural richness, the quality and quantity of the Sutton Hoo artefacts reflected a vibrant, worldly society, and were of such technical artistry that they changed our understanding of this period.

Lying 290 miles away as the crow flies, and much, much further if you were rowing or sailing an early medieval ship – there is an extraordinary and unlikely link between the archaeology of the Isle of Man and Suffolk, and between the Manx and Ipswich museums.

“In early May 1939 Guy Maynard, the curator of Ipswich Museum, wrote to the Manx Museum asking for details of a ship burial which had previously been excavated here. Although he doesn’t name it, he was referring to the ship buried at Knock y Dooney, which was investigated by the Manx Museum director PMC Kermode in 1927. The Knock y Dooney ship was the first ship burial to be recognised as such in the British Isles.

The letter is fascinating because it gives us an idea of how they were provisionally interpreting the finds from the first season, which has obvious implications for how they were preparing for the 1939 work that began just a few days later. Maynard included a picture of a gilt bronze disc, which had been found in Mound 2 along with the first of the rivets which had alerted Brown to the presence of ships in the burial mounds.”

Maynard’s letter shows clearly that their thinking was that the graves were from the early 9th century, and that the artefacts had been plundered by the Vikings from the Saxons, who had in turn looted them from the Romans. The mound cemetery at Sutton Hoo in fact dates from the late 6th through to the early 7th century, well before the viking raids that marked the arrival of the Norse and Danes. The ship buried at Knock y Dooney was about 30’, or just over 9 metres long, and although not subjected to scientific dating, is probably about 300 years more recent than the enormous 27-metre ship found at Sutton Hoo. In both cases, little more than the rusted remains of the rivets that held the timber together survived, allowing the size of both vessels to be calculated. 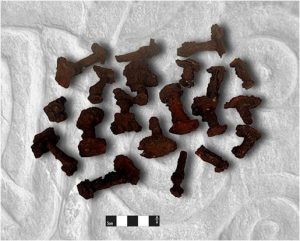 The ship buried at Knock y Dooney had rotted away leaving only 260 iron rivets. It was the survival of rivets like these which attracted the attention of Ipswich Museum, as the ship found at Knock y Dooney was the first of its kind to be excavated in its entirety in the British Isles.

Sadly we don’t have a copy of the Manx Museum’s response in our correspondence archives – ‘Personal reply’ is pencilled across the top corner of the letter from Ipswich – but we do know that Maynard’s inquiry had wider consequences. His letter is very formal, and is addressed simply to ‘the curator’, rather than to anyone by name. It’s quite possible that he didn’t personally know Basil Megaw, who had graduated from Cambridge University in 1935, and had been Assistant Director here for about three years. In turn Megaw also crucially contacted Charles Phillips at Cambridge, and within a month Phillips paid a visit to Sutton Hoo, by which time Basil Brown had revealed the full scale of the ship. You could say, ‘…and the rest is history’, although not quite in the way it was portrayed in The Dig.

The film itself is based on a novel written by the nephew of Margaret ‘Peggy’ Piggott, one of the real-life excavators of the burial, and concentrates the events of two years into less than two hours, with some dramatic licence.

“I really enjoyed the film and would urge everyone with an interest in archaeology, and medieval archaeology in particular, to watch it whilst accepting and being mindful that it is the result of two layers of fictionalisation: anyone who knew or knew of Peggy Piggott, or Margaret Guido as she later became – she was already a very experienced digger in 1939 and went on to become a formidable finds expert – will be irritated by the film’s portrayal of both her and her role in the excavation. On the other hand I think it powerfully evokes both the natural calmness of rural 1930s Suffolk – into which a buzzing Spitfire is just as intrusive and seemingly anachronistic as Robert Pretty’s toy rocket – and the reality of archaeological excavation: hours of slow concentration punctuated by moments of frenetic excitement. It also shows how important it is to investigate the context in which archaeological objects are buried, when the wooden ship in which they were buried had completely rotted away.

Returning to reality, for me one of the things that is wonderful about the link to the Manx Museum is how, in the days before modern technology, the resources of a tiny, specialised profession reached across the islands of Britain to bring together both the knowledge and individuals necessary to reach an outcome that befitted a discovery as momentous as this. It’s striking that we often still do the same today, but with the luxury of email and the internet.”

The site of Sutton Hoo is administered by the National Trust. The artefacts from the excavation are on public display in the British Museum, having been donated to the nation soon after their discovery by Edith Pretty, the owner of the land in which they were buried.

The site of Knock y Dooney is privately owned by Dave Martin, who is also a Manx National Heritage Trustee, and artefacts are held in the national collections at the Manx Museum.  It is a significant historical and archaeological site in the Parish of Andreas in north of the Isle of Man.  Archaeological excavations at Knock y Dooney have uncovered a bilingual ogham stone; a Christian keeill; a Christian carved stone cross; and a Viking Age boat burial.

Find out more on www.imuseum.im and keep a look out on www.manxnationalheritage.im in the weeks ahead for exciting news of new archaeological discoveries on the Isle of Man.

Further recommended reading: A Guide to the Archaeological Sites of the Isle of Man, priced £14.99 from www.manxnationalheritage.im/shop 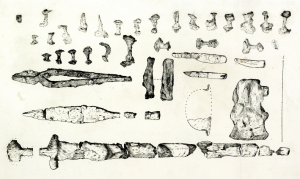 An original drawing by the excavator PMC Kermode (first director of the Manx Museum) of the iron weapons, tools, and some of the ship’s rivets found at Knock y Dooney. The drawing illustrated the report which drew the attention of Ipswich Museum in 1939, when planning the second season of excavations at Sutton Hoo.