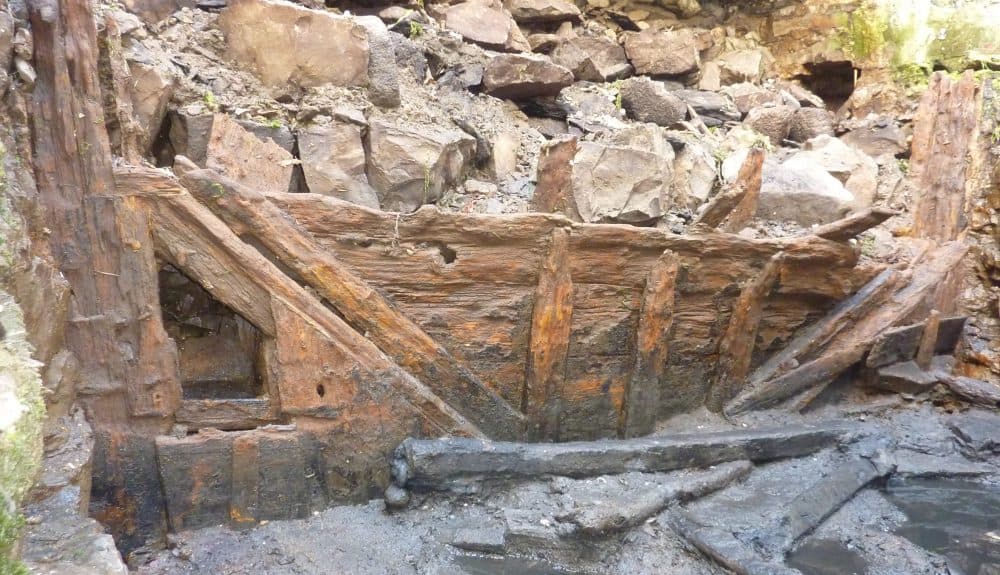 Archaeologists have recently completed work on the 18th century dock at the Nautical Museum in Castletown.  The dock was built about 230 years ago by George Quayle (1751–1835) for his boat the Peggy, centrepiece of the museum and one of the oldest surviving wooden sailing boats in the world.  It was created by excavating into the limestone bedrock and protected by high walls, with an entry through an arch – now filled with masonry – still visible from the other side of the harbour mouth.

In February 2014 Manx National Heritage began excavation of the dock to enable the removal of the Peggy from the boat cellar in which she had been entombed for two centuries.  Work ceased after six weeks once sufficient space had been created to allow the Peggy to be craned out and removed to a special facility where she is currently undergoing conservation and repair.

The current phase of work at the Nautical Museum was designed to reveal the arrangements for closing off the entrance to the dock.

“Two years ago we could see that there were timbers across the mouth of the dock, but we could not be certain if they had been placed there as part of the work to block the entrance when the dock went out of use, or if they formed a gate. We knew from old photographs that there had once been a pair of gates on the outside of the entrance – remnants survive even today – but we couldn’t agree if an arrangement involving two sets of gates was likely.  The trouble with docks of this age is that most have since been destroyed, altered or modernised out of all recognition, so we have very little to compare it with.”

Excavation revealed that the timbers were indeed part of a gate, which was raised and lowered into place and slotted into a frame fitted with sluices to let seawater in and out. Now that the gate has been revealed and recorded, it has been covered over again with a protective wall of sandbags whilst a permanent arrangement to protect it from the flow of the tide is designed.

“The more we delve into the buildings at the Nautical Museum, and the more we research the documents that survive from Quayle’s life, the less I am surprised by what we discover. George Quayle was an exceptional individual who seems to have been incapable of doing the ordinary when a more interesting or sophisticated solution offered itself.”

The Nautical Museum is open daily throughout the summer until 30th October from 10am to 4pm.

Although the Peggy is currently away for conservation, the museum highlights the personal story of George Quayle and his family, showcasing previously unseen objects uncovered in the archaeological excavations and allowing visitors to see the recently discovered dock.