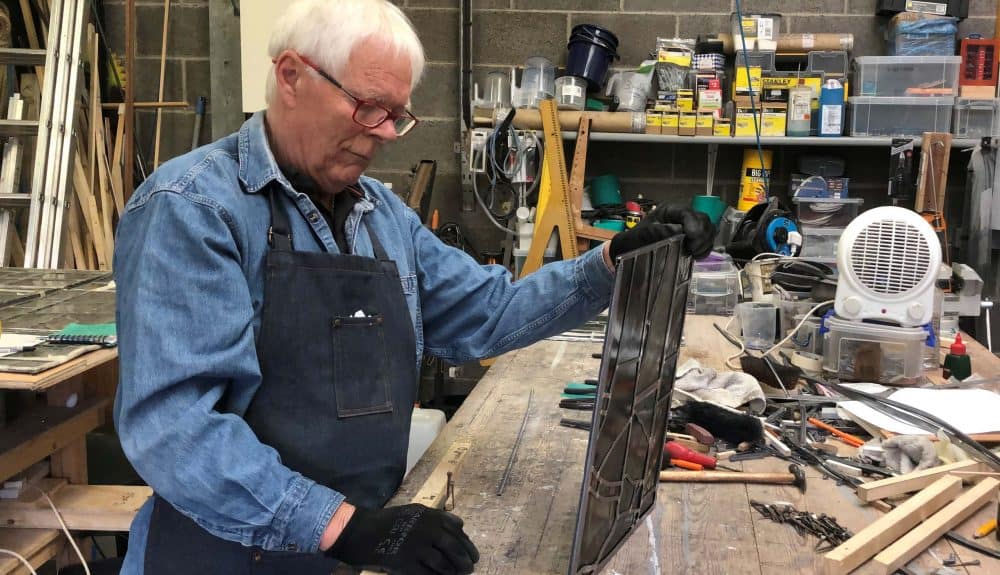 Manx National Heritage, the charity responsible for the care and promotion of the Isle of Man’s natural and cultural heritage, is delighted to have supported the Friends of Jurby Church in their efforts to conserve and restore a unique stained glass window at St Patrick’s Church in Jurby.

The 19th Century stained glass window depicts St Patrick baptising St Maughold.  It was originally installed as a memorial to William Farrant of Ballamoar, whose family lived in the parish of Jurby until the end of the 19th Century.

The Farrant family’s influence in the parish endured long into the 20th Century and their lasting legacy is St Patrick’s Church or Jurby Church as it is known today.

“We are delighted that work to restore the William Farrant memorial window is well underway.  Led by the Friends of Jurby Church, a specialist contractor was recently engaged to carefully remove the glass and lead-work, with all eighteen stained glass panels now removed and undergoing conservation”.

Stained glass windows form a highly sensitive interface between the exterior and the interior of historic buildings, making them vulnerable to problems including rain penetration and condensation.

“Whilst the fields of colour in stained glass windows are commonly viewed from a distance and may appear to have survived the ravages of time, the reality is often very different. Stained glass is fragile and vulnerable.  This particular window in Jurby Church was south facing and suffering the impact of over a century’s weather”.

Sandra Kerrison of The Friends of Jurby Church said:

“The stained glass windows in Jurby Church are significant to the history and heritage of the parish of Jurby and of the Isle of Man, and The Friends have made the restoration of the beautiful St. Patrick and St. Maughold window the focus of their fund-raising for the past 2 years. It has been fascinating to see from Robert Bullock’s photographs the skills and craftsmanship involved in the restoration and we are looking forward to seeing the window back in Jurby Church later in the summer.”

Manx National Heritage has been able to support over twenty community heritage projects across the Isle of Man in recent years due to a generous bequest by the late John Donald Collister. Following a public consultation the Trustees of Manx National Heritage decided to allocate a significant amount of funding to local heritage in “Donny” Collister’s memory.

“Mr Collister’s bequest was remarkably generous and as well as supporting the charity’s priorities it has made possible some really impressive community heritage projects across the Isle of Man”.

For further information on Manx National Heritage, sign up to our latest news, donate and support our work, please visit: manxnationalheritage.im