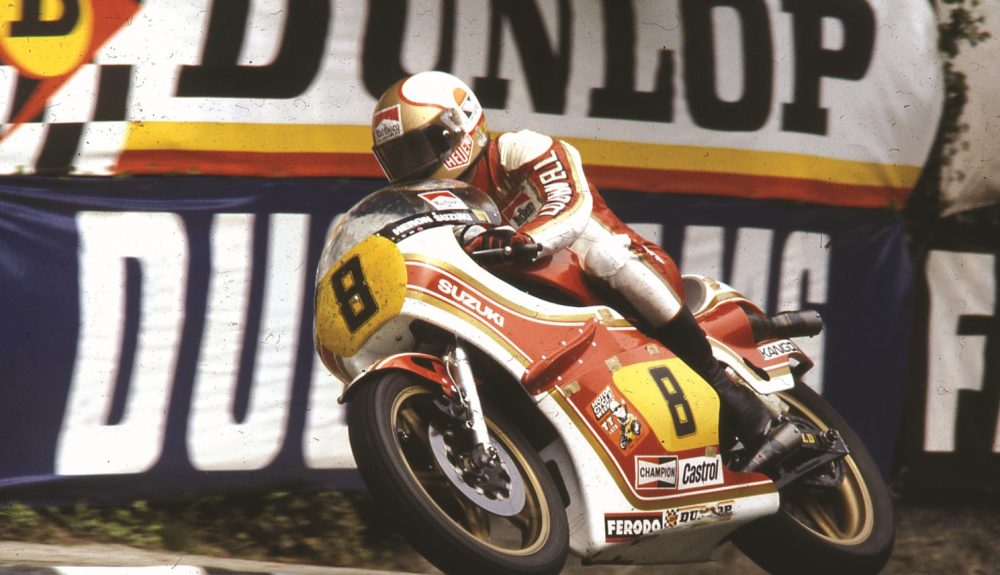 One of the most iconic machines in the history of motorcycling has roared back to life as preparations for the opening of a world class new TT Gallery gather pace at the Manx Museum. The Suzuki RG500 was ridden to victory by Mike Hailwood, the most successful rider of his generation, in the 1979 Senior TT.

In preparation for display in the Manx Museum’s TT gallery, another legend has breathed life into this spectacular motorcycle once more, studying and recording the extraordinary machine’s engine and gearbox.

Carefully selected for his experience working on two stroke engines for some of the greatest riders of modern times, including Joey Dunlop, Carl Fogarty and Steve Hislop, racing engineer Anthony ‘Slick’ Bass was honoured to take up the challenge. Working on the priceless machine in a secret location over a three to four week period, what he found was extraordinary. Instead of the expected corrosion and successive restorations, the engine was just as Mike Hailwood had left it.

“After carefully stripping down the machine, to my amazement, we discovered the engine to be in near to original condition, which was an absolutely extraordinary find. Remarkably, coolant liquid had corroded a small hole in the water pump housing, with the liquid draining away, meaning that magnesium and aluminium components had not corroded over time. The machine had effectively been dry since around 1980. The coating of oil remaining inside the engine had preserved the machine in amazing condition”.

The work uncovered fascinating details never before revealed, such as the factory-stamped engine, the modified frame, the prototype brakes and thumb choke, and unbranded prototype tyres which had been slashed as they came off the track.

“After detailed studies, the machine was carefully reconstructed, using next to no replacement parts in the process and we had the thrill of actually hearing Hailwood’s Suzuki run once again for the very first time since 1979. This was one of the most extraordinary days of my career and I’ll never forget it”.

Hailwood was already a living legend when he returned to the Island in 1978 after an 11 year absence, single-handedly re-invigorating the event. In 1979 he returned for his farewell TT. Only Suzuki had the confidence to supply a machine for him to ride, the RG500 on which Hailwood scored his 14th and final TT win.

Although the machine is too fragile to risk damage on the course, in future the thrilling sound of the RG500 roaring into life will continue to be heard when the bike is started as part of regular conservation and maintenance.

The RG500 will go on display in the new TT Gallery at the Manx Museum, paired with the original leathers and helmet worn by Mike Hailwood in one of the most famous races of all time, the 1979 Senior TT.

Opening in time for TT 2023, this spectacular gallery at the Manx Museum is a new visitor attraction not to be missed. Lead image: Mike Hailwood at Union Mills in the 1979 Senior TT. Image courtesy of Ken Sprayson.