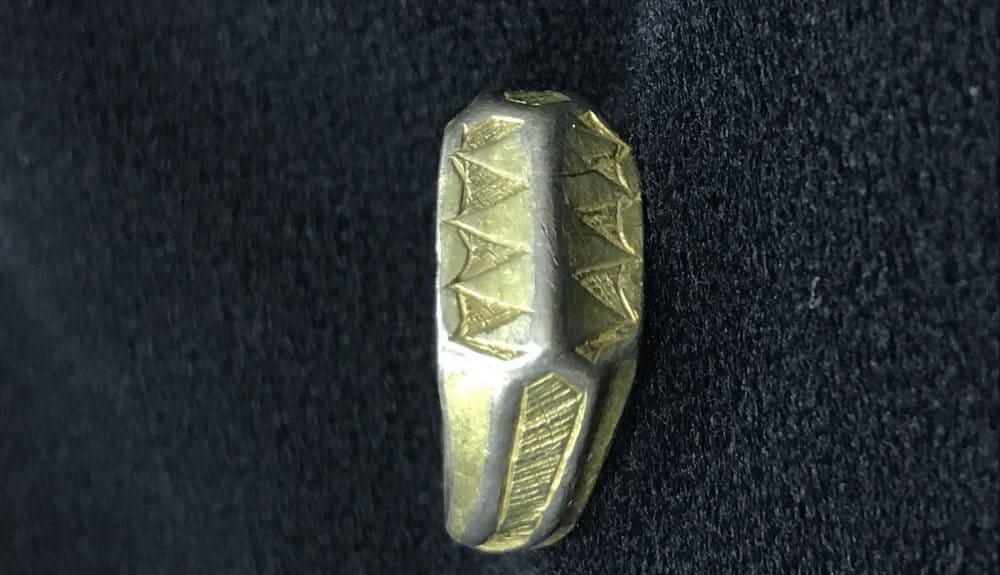 A 600 year old silver and gilt ring unearthed on the Isle of Man was today declared to be “Treasure” by the island’s Coroner of Inquests.

First discovered in May this year by metal detectorist Gordon Graham, the ring dates to between AD 1400 and 1500. It is made of silver, but gilded with gold and finely decorated with geometric patterns.

“We don’t know who this particular ring belonged to before it went into the ground, but we can see from the quality that they had the means to buy good pieces.

The period between AD 1400 and 1500 is an interesting one for the Island.  It led to the start of a relatively settled time, with the rule of the Stanley family providing political stability.  This encouraged wealth generation and we could suppose that this ring originally belonged to either a wealthy local person or visitor who wasn’t averse to showing their wealth.  But, equally likely, perhaps it belonged to someone who just liked nice jewellery!”

Viking rule had ended in AD 1266 and was followed by a century or so of political and social upheaval, with the Island alternating between English and Scottish rule.  When King Henry IV of England eventually took control, the Island was officially granted to Sir John Stanley in 1406.  The period is not very well-documented, but the Stanley family were one of the wealthiest and most influential in England and they no doubt brought some of this to the Island.

One of the most notable events during this century was the writing down of the Manx law for the first time.  Since Viking times, the law had been only spoken, passed down by word of mouth.  In 1417, on the instruction of the second Sir John Stanley, the laws of the Island began to be written down.

All archaeological artefacts discovered on the Isle of Man should be reported to Manx National Heritage.  If an artefact meets the categories in the Treasure Act 2017, which include being at least 300 years old and having a metallic content of at least 10% precious metal, the find must also be reported to the Coroner of Inquests, who decides whether or not the find is Treasure.  If declared to be Treasure, a financial reward is usually paid to the finder and landowner.  This ring is the first reported find to be declared Treasure under the Isle of Man’s updated treasure legislation”.

Manx National Heritage extends their thanks to Gordon and the landowners for their assistance and support throughout the Treasure process.

The newly discovered ring will go on display in the Medieval Gallery at the Manx Museum from Saturday 16 December 2018 until February 2019.  The museum is open daily from 10am to 5pm and admission is free.

More information on the Treasure Act 2017 is available at: