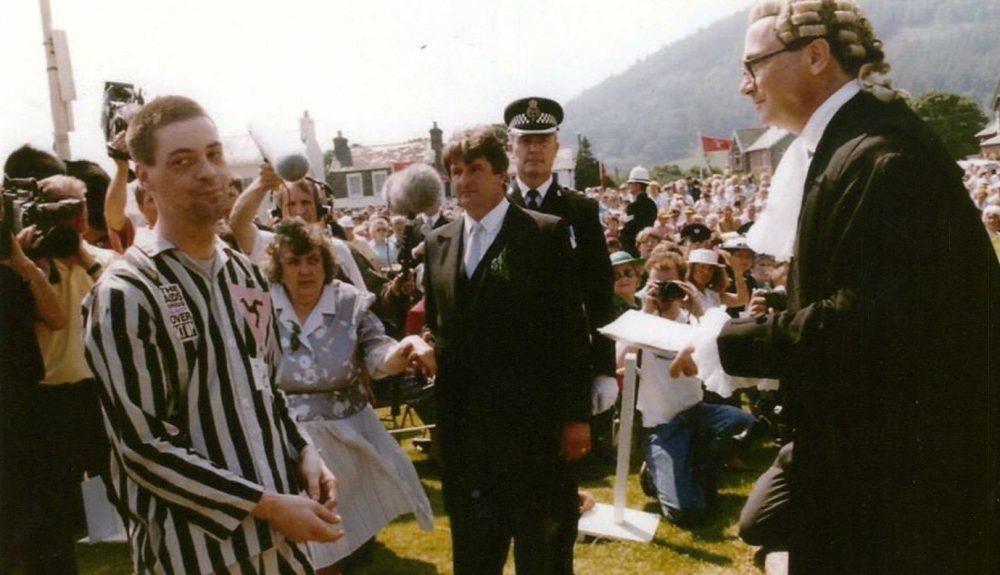 On Tynwald Day 5 July 1991, Isle of Man gay rights campaigner Alan Shea exercised his democratic right to present a petition of grievance to the Island’s Parliament, Tynwald. His petition sought a change in the Manx law relating to the decriminalisation of homosexuality.

Alan was joined on Tynwald Day by members of Outrage, a UK based gay pressure group, to stage an effective and lawful protest.  Placards were held aloft, literature distributed and a stall was staffed on the Fairfield.  Gay rights activism provoked strong opposition on Island and during the proceedings at Tynwald Hill, there was outright hostility from a vocal section of the crowd. Alan received death threats immediately prior to the protest and was subjected to abuse, jeers and heckling throughout the day. In contrast, off island support and encouragement came from pressure groups, high profile celebrities, international film crews and members of the public.

The event was organised by the Ellan Vannin Gay Group which championed the right of gay people in the Isle of Man to lead their lives free from fear and oppression; also their right to privately express themselves sexually without the constant fear of prosecution. With his head shaved, wearing a mock prison uniform Alan was deliberately drawing parallels between the treatment of gay people on the Isle of Man and Nazi persecution of homosexuals during the Second World War.  With the threat of imprisonment for acts of homosexuality, many local gay people felt isolated and imprisoned within their own communities and targeted by police activity.  A number of young men took their own lives during this period.

To mark 30 years since Alan’s protest, Alan Shea and his husband, Stephen Moore will be guests of honour at this year’s Tynwald Day.  Manx National Heritage will also be returning Alan Shea’s protest clothing to St Johns on Tynwald Day 2021.

“Alan Shea’s protest suit is one of the most important contemporary items we have in our social history collections.  We are delighted to be exhibiting the suit and telling the protest story this Tynwald Day.

It is extraordinary to think how much the Island’s attitude has changed. Last month thousands of people joyously attended the Island’s first Pride festival, but just 30 years ago Alan was subjected to jeering and hissing as he presented his petition. His bravery and courage and the momentum built by the Ellan Vannin Gay Group’s campaign led not only to a change in the law but a complete change in attitude on the Island. Watching the film footage of the protest through the lens of 2021 is truly shocking.

We are inviting people to visit the display during the afternoon, have a chat with us about this period in our history and perhaps share with us their own memories or reflections on the protest. This display forms part of our Collecting Pride project, which is a month long campaign to collect, record and represent stories from members of the Island’s LGBTQIA+ community to mark the Island’s first Pride festival.

We are very grateful to Alan Shea for donating his suit and his papers documenting this period.  We would also like to thank Culture Vannin, who are working with us to set up the display at their office at St Johns.”

The 1991 Protest display will be open from 12 noon until 4pm at Culture Vannin, Main Road, St Johns.

If you would like to contribute to Manx National Heritage’s Collecting Pride campaign, please email your submission to collect@mnh.im or contact Katie King Katie.King@mnh.im for further information.