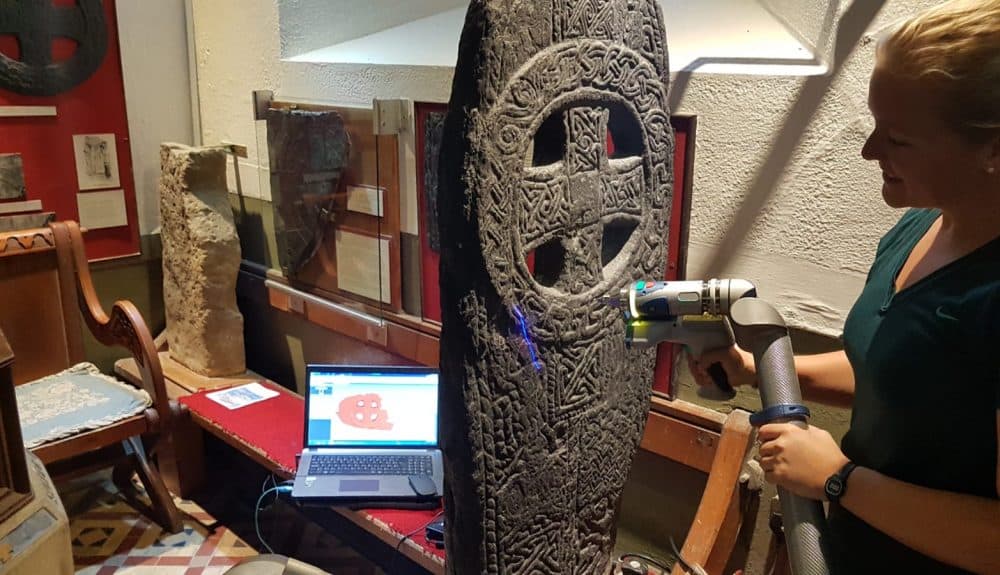 Manx National Heritage is undertaking a ground-breaking project to create 3D digital images of all 210 of the Manx crosses in a collaborative project with Lancaster University, the University of Southampton, and Knowledge Integration.

The finished 3D images will capture evidence of the current physical condition of the crosses and inform plans for their future preservation, whilst also being made available for education, research and recreational enjoyment.

“For the purposes of conservation, the highest possible accuracy and precision is needed. Recent advances in laser scanning have, for the first time, made this possible. Detailed scans will capture the surface of the crosses to a resolution of one tenth of a millimetre.

Scanning the crosses posed a number of challenges including difficulties of access in remote locations and cramped display conditions. The objects themselves are mostly dark in colour which makes scanning much harder and the detail we are aiming to capture can elude the untrained eye”.

Manx National Heritage has secured a partnership with Dr Patricia Murrieta- Flores of Lancaster University, an archaeologist with a good track record of work of this type and scale.

“Dr Murrieta-Flores is a leader in the digital recording, interpretation and communication of archaeological remains.  Along with colleagues from the University of Southampton, she has championed techniques of digital recording with Historic England”.

The Manx Crosses are stone objects of extraordinary diversity and cultural interest found throughout the Isle of Man. They range from simple grave markers to elaborately decorated and inscribed monuments. The stones were carved during a pivotal time, stretching from the Island’s introduction and conversion to Christianity in the 5th and 6th centuries, through to the reorganisation of the church in the 12th and 13th centuries.

Some of the stones are carved with letters of the Ogham, Runic and Latin alphabets, while others include personal and place names and scenes from Christian and Norse mythology.   About a third of the crosses are publicly displayed in two cross shelters located at Kirk Maughold and Old Lonan Church in their respective parishes. Another third are allocated their own spaces in several churches throughout the island. The last third of the crosses are located within the Manx Museum, either on display in the galleries or within the stores or archives.

The 3D models of the Manx Cross Collection will be made available to view, zoom and rotate via www.imuseum.im in early 2019.