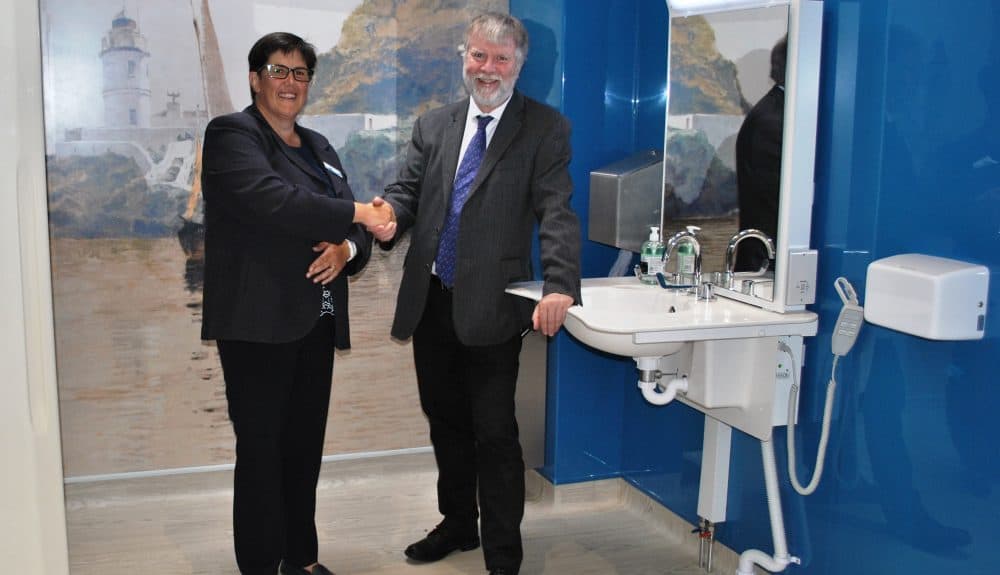 The Changing Place will provide a safe and fully equipped bathroom for people with multiple disabilities and complex needs who have difficulty using standard accessible toilets, including people with illnesses which impact mobility such as motor neurone disease and multiple sclerosis.

The facility includes a height adjustable changing bench and overhead powered tracked hoist, an adjustable washbasin and centrally placed toilet with room either side for carers.

A ‘Quiet Room’ has also been installed for visitors who may experience heightened sensory anxiety and for use as a space for those who may need or wish to use the room for quiet contemplation.

The facility has been designed with the input of the Changing Places Consortium as well as disabled people and their carers, and will provide publicly accessible facilities to enable people with complex needs to stay out longer in the Isle of Man’s Capital, visit the Manx Museum and enjoy the surrounding area.

A grant of £25,147 was awarded to the Manx Museum and National Trust, with the remaining 53% of the total cost of £54,024 covered by its charitable funds.

Edmund Southworth, Director of Manx National Heritage said: ‘The absence of suitable toilet and changing facilities can mean that people with disabilities are often limited to the places they can go or the length of time they can spend there. Changing Place toilets can vastly improve quality of life and we are delighted that this facility, which will hugely benefit the Island, is now available at the Manx Museum. We are very grateful to Manx Lottery Trust and the Trustees of the Manx Museum and National Trust for making this achievable.’

Jonathan Hall, Chairman of the Manx Museum and National Trust, said: ‘The Trustees were unanimous in their support of this project to create the Island’s first and much needed, publicly accessible Changing Place and delighted that it is now open.’

There are only a few equivalent facilities at schools and colleges around the rest of the Island, but these aren’t freely accessible to the general public.

Sarah Kelly, Chairman of the Manx Lottery Trust, added: ‘It’s estimated over 300 residents and up to 1,000 visitors could directly benefit from the Changing Place every year. Our Trustees recognised the value of having better public facilities and we’re delighted these are now available.’

To find out more about the work of the Manx Lottery Trust visit: www.mlt.org.im