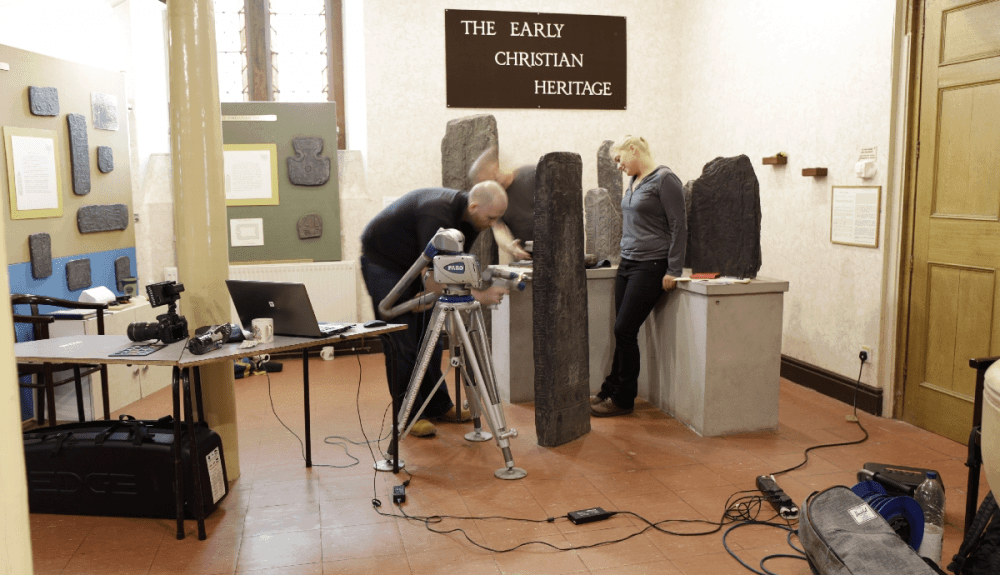 The Manx Crosses are one of the greatest legacies of early Christian faith and Viking settlement and conversion on the Isle of Man.
Numbering over two hundred grave-markers, memorials and altar-fronts, they are mostly carved in local stone, the decoration of which ranges from simple incised crosses to complex interlace and depictions of Christian and Scandinavian themes.  A large number are marked with inscriptions using Ogham, Roman and runic scripts.
Some of the stones are protected in churches and shelters across the island, while others stand in the open air of churchyards and even fields; yet more are displayed in the Manx Museum in Douglas.
Now, in a move designed to make the crosses more accessible than ever before, Manx National Heritage has published three-dimensional laser scans of the stones which can be viewed at https://sketchfab.com/manxnationalheritage
The stones were scanned and photographed during the summer of 2018 in a fieldwork project lasting three weeks, after which several months of painstaking processing produced a detailed digital file for each object.
The project was initiated and funded by Manx National Heritage to provide a baseline condition survey of all of the monuments, so that further decay or damage can be detected in the future.  As statutory guardians of the stones – each cross is a designated ancient monument under Manx legislation – Manx National Heritage is responsible for the protection of the stones, even when they are in private ownership or, like the majority of them, displayed in parish churches around the island.

“These crosses are a source of great local interest and pride to communities up and down the Isle of Man.  They are also of international significance to archaeologists, art historians and linguists for what they tell us of the island’s medieval past and the people that commissioned and made them.  It is our responsibility to protect the stones but also to promote and interpret them, and for the crosses to become available and accessible to so many by this means is a godsend.”

Using state-of-the-art equipment, the crosses were laser-scanned and photographed by leading contractor Archaeovision, to a specification, agreed by Manx National Heritage and academic partner Lancaster University, which exceeds the published guidance from Historic England – Metric Survey Specifications for Cultural Heritage and 3D Laser Scanning for Heritage.  This is intended, in a fast-developing technical field, to ensure that the record made will stand the test of time and be usable well into the future.

“We need to know whether the crosses are deteriorating, but first we had to find a way to record them in fine detail. What we have ended up doing is unprecedented in its scale and ambition.”

Such is the level of detail – down to 0.025mm – that some of the laser scans of the most complicated stones record the coordinates of more than a billion points in space, and so painstaking was the level of recording that it sometimes took several hours to record just one cross.

The digital images can be found at https://sketchfab.com/manxnationalheritage .