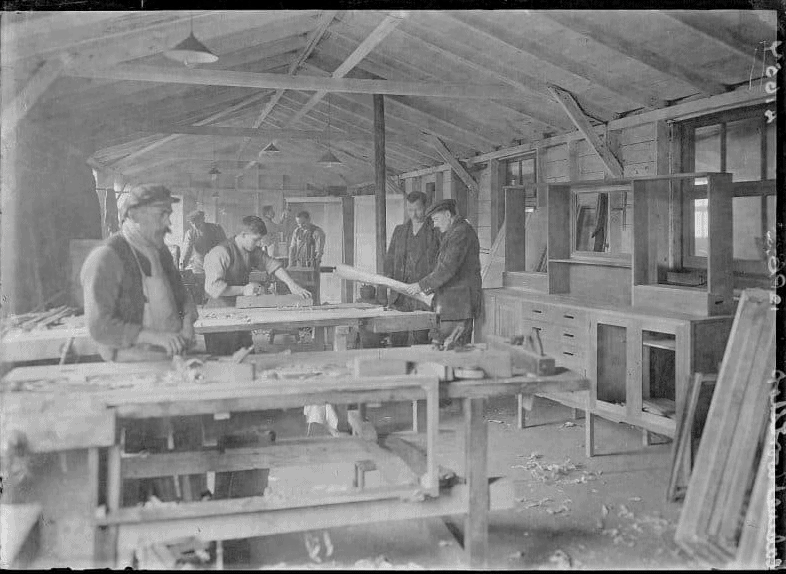 A rare and historically significant piece of Charles Rennie Mackintosh designed furniture, made at Knockaloe Internment Camp on the Isle of Man, has been sold at auction for almost £0.25million.

Manx National Heritage, the charity responsible for the Isle of Man’s natural and cultural heritage had hoped to acquire the piece for the Manx National Collections, joining its existing collection of First World War internment camp-related material including artwork, objects, photographs, glass plates, printed and manuscript material, however, its sale price far exceeded all initial expectations.

“The cabinet is exceptionally significant having been designed by Charles Rennie Mackintosh, made by Charles Matt and the interned furniture makers and made at Knockaloe Internment Camp on the Isle of Man. Its importance and significance is at a Manx, British and international level as part of the internment narrative of the history of the First World War.

MNH’s bid for the cabinet was supported by the Friends of Manx National Heritage and The Art Fund, who had generously agreed to support the proposed acquisition.  Whilst MNH weren’t the successful bidder, we extend our sincere thanks to both parties for their support”. 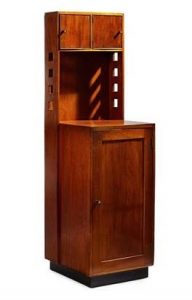 Several examples of Mackintosh-designed furniture made at Knockaloe are held in public collections including the V&A Museum, Hunterian Art Gallery/ University of Glasgow and 78 Derngate, but it is extremely rare for a documented and provenanced example to come up for sale at public auction.

Having been an aspect of the First World War that was in danger of becoming a ‘lost footnote in history’, the role of civilian internment and in particular the Isle of Man’s role, has become increasingly recognised internationally at an academic level.

Leading academic, Professor Panikos Panayi, has said that Knockaloe Camp was the most significant part of a world-wide phenomenon of the internment of civilians. Knockaloe is now recognised as a ‘mega-camp’ in terms of both its physical size and the number of internees held at the camp. As a result, civilian internment and in particular, Knockaloe Camp, may be considered a defining characteristic of the Island’s role in WW1.

“In terms of its design, the cabinet is associated with one of Britain’s leading architects and designers, Charles Rennie Mackintosh. On the face of it, this seems such an unlikely scenario that in the midst of war, a famous designer would still be taking on commissions for wealthy clients and that they would be using an interned ‘captive’ workforce to produce the items”. 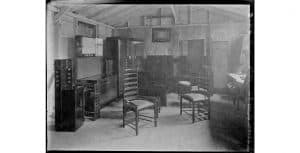 The piece was originally acquired by Bassett-Lowke (1877 – 1953), who founded the firm of Bassett-Lowke which specialised in producing toy construction sets, model railways, boats and ships.   After his marriage, Lowke wanted his new marital home 78 Derngate, to be fully remodelled.  Lowke’s wife, Eliza, was a Quaker so he would have been aware of the Quaker’s work in the civilian internment camps and he himself was an admirer of German manufacturing. Although the furniture commission has been the subject of significant research, there is still more to discover.

For the Anglo-German community or the German diaspora in Britain, this piece of furniture is hugely symbolic of the experience of their own migrant community, in particular the German furniture making workshops of the London East End that supplied high quality furniture for many of the top quality and high end furniture shops of the London West End. These communities of economic migrants that had settled in Britain in the late 19th century and early 20th century were largely destroyed by internment, the experience of the First World War and the forced repatriation of many of the internees after the war.

MNH is keen to share information on the provenance of the cabinet with its new owners, including archives and glass plate images, which depict the internees who made the cabinet and the workshop it was made in.  To get in touch, email Kirsty.Neate@mnh.im.

Designed by Charles Rennie Mackintosh (1868-1928) and made by Charles Matt & his workshop (civilian internees in Knockaloe Civilian Internment Camp).

Inlaid mahogany bedside cabinet with ebonised plinth and shell-inlaid handles, the upper section with two doors flanked by uprights pierced by squares, the base with single panelled door enclosing a single drawer and a shelf

Following the success of his designs for Miss Cranston’s Ingram Street Tearooms in 1911, Charles Renee Mackintosh spent the next few years struggling to find work, and by 1914 he and his wife Margaret had moved to Walberswick in Suffolk. They remained in close contact with Francis Newberry and his family, who spent their summer holidays in cottages nearby.

Mackintosh’s main client during this period was W. J. Bassett Lowke, of 78 Derngate, Northampton. Bassett Lowke had fostered early connections with those involved in the Deutscher Werkbund movement, which played a central role in the development of modern architecture and industrial design. Having not heard of Mackintosh prior to 1914, Bassett Lowke hired him for a project following the recommendation of a close friend. After leaving Glasgow, Mackintosh was keen to explore the inspirations he found during his visit to Vienna in 1900, and this married well with Bassett Lowke’s open-minded approach to the design and manufacturing process.

In the current lot, Mackintosh places a clear emphasis on angular lines, minimal decoration and a far more solid sense of form; a departure from the curvilinear and stylised decorative motifs which dominated much of his earlier work. Typically, Mackintosh would have personally advised the furniture maker, amending his designs as the piece was in the midst of construction. However, under Basset-Lowke, Mackintosh had to rely on his drawings to communicate his wishes to the company’s craftsmen, many of whom were German immigrants working on the Isle of Man. Designs focussed on broad planes of timber, polished and waxed rather than stained, enhanced by details of abalone inlay. The result is an array of visually striking furniture with an elegant decorative effect that defines his work in Northampton.