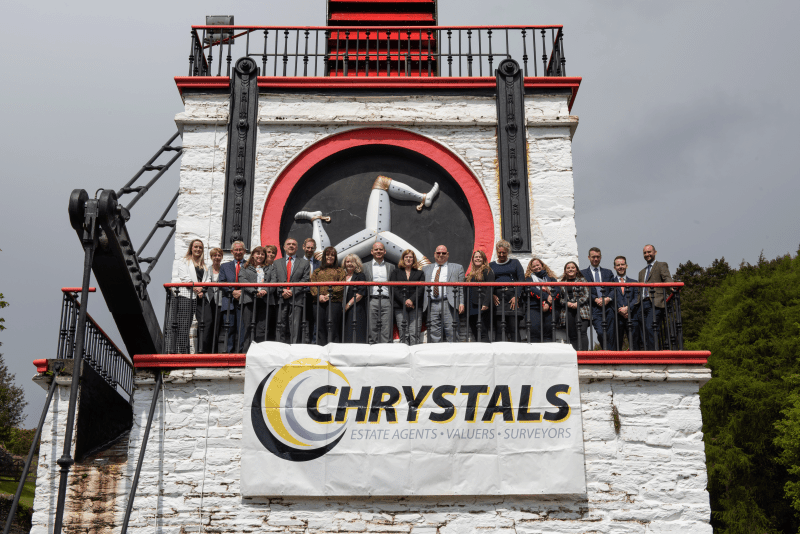 Manx National Heritage (registered charity number 603), who look after the cultural and natural heritage on the Island have teamed up with Chrystals Estate Agents to jointly celebrate the 165th anniversary of Chrystals and the Great Laxey Wheel which both opened in 1854.

On Friday 10 May, Chrystals staff and representatives of Manx National Heritage marked the occasion with a joint photo call and birthday cake in the backdrop of the Great Laxey Wheel.

Manx National Heritage will soon be launching their 1854 fundraising campaign, seeking support from companies and individuals of £1854 to tie in with the anniversary. The donations will go towards the development of much-needed new visitor facilities at the Laxey Wheel including accessible toilet provision.

Chrystals are the first Company to donate £1854 to the campaign and will be recognised along with fellow donors within the new visitors centre.

Manx National Heritage Fundraising Manager, Kevin Byrne, commented:
“We were delighted to work with Chrystals to celebrate the joint birthdays of The Laxey Wheel and Chrystals. Improving visitor facilities at the iconic Laxey Wheel is a top priority for Manx National Heritage over the next few years and having Chrystal’s support to kick start the campaign is greatly appreciated”.

Shane Magee, Chairman of Chrystals added;
“We were delighted to mark the 165th Anniversary of the oldest property firm on the Island, at such a unique historical site that shares the same birthday.

It is easy to let such occasions pass by without reference to our company’s history. My fellow directors and staff are delighted that Chrystals are the first corporate sponsor to support the proposed Manx National Heritage 1854 Laxey Wheel Visitor Centre Campaign.”

The Great Laxey Wheel or Lady Isabella (as she is also known) is the largest working waterwheel in the world and a hugely important part of Manx National Heritage’s portfolio of historic sites on the island.  A brilliant example of Victorian engineering she was built in 1854 to pump water from the Laxey mines. Today a climb to the top is rewarded with panoramic views across the Laxey Valley, accessible by the 94 steps to the top.

To find out more about Fundraising for  Manx National Heritage or to support the 1854 Laxey Wheel Visitor Centre appeal, please contact Kevin Byrne on 01624 648013 or kevin.byrne@mnh.im