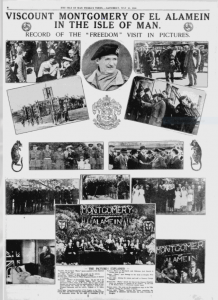 On Remembrance Day, Manx National Heritage, the registered charity responsible for the care and promotion of the Isle of Man’s natural and cultural heritage will recall Viscount Montgomery of Alamein’s visit to the Isle of Man, in a special commemorative film screening hosted in the Manx Museum Lecture Theatre.

Field Marshal Viscount Montgomery of Alamein, Chief of the Imperial General Staff, spent two days on the Island in May 1948. The visit had been long awaited as Monty was due to visit the Island one year earlier but engagements in London had prevented him from doing so. When he eventually arrived on Isle of Man, he was made an honorary freeman of Douglas and unveiled a tablet naming the Montgomery Bed in the Ramsey Hospital.

“Luckily, a Manx amateur filmmaker named J. Walter Royston captured some of the key parts of Monty’s visit to the Island, and as it’s coming up to Remembrance Sunday we thought that it would be a fitting tribute to share Royston’s footage of the renowned war hero engaging with the Manx people, and most importantly, his visit to Douglas War Memorial”.

Monty had a packed couple of days, first visiting King William’s College and inspecting the Junior Training Corps, an event which Royston managed to film closely.

Before leaving the school, Monty told the Head, Mr S. E. Wilson, that he would like the boys to have a whole day’s holiday to commemorate the occasion of his visit, something which the school granted.

Monty continued his trip with a visit to the Manx Regiment at the Drill Hall in Tromode, the headquarters of the 515 L.A.A. This Regiment had fought with him from El Alamein to the finish of the war in Germany. Many of the officers and men who had gathered had fought with General Montgomery as he was then known in his campaigns. Addressing the Cadet Force who had also gathered at the Drill Hall, he talked about the possibility of a Third World War and asked the crowd:

“…why in this Island of 50,000 people which sent nearly 6,000 overseas to fight – it is a tremendous number now in peacetime when the danger is there just the same, the young men of this Island don’t come and join the best club in the Island.”

“Perhaps,” he added with a twinkle in his eye and amidst laughter, “I had better have a talk to the women of this Island!”

One of the most poignant parts of Monty’s trip that Royston managed to capture was his visit to the Cenotaph Ceremony at Douglas War Memorial. Here, Monty is presented with a poppy wreath in the shape of the Three Legs of Man. 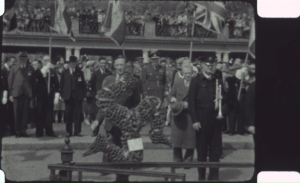 “I have personally never seen a poppy wreath in the shape of the Three Legs before, especially not one that big, and it really shows that the contribution that the Manx people made to the World Wars was remembered and appreciated. I imagine that seeing this wreath would have really struck a chord with Manx people at the time, as it did with me today”.

“A halt will be made at the War Memorial, where the man who commanded Britain’s victorious armies will lay a poppy wreath (a massive Three Legs), in memory of the Island’s sons who fell. The standard bearers of the British Legion will form a guard of honour, and trumpeters will sound the “Last Post” and “Reveille.””

Watching Royston’s footage reveals hundreds of people lining the streets waiting to catch a glimpse of Monty, and you can really see why the Ramsey Courier said that Monty captured “the Hearts of the Manx People…and his visit will long be remembered”.

To coincide with the screening and Remembrance Day, 5 further films have been released on www.imuseum.im and you can access them by clicking ‘Isle of Man on Film’ on the homepage. The films feature footage from the early post-war years, mainly 1947 and 1948 including scenes of RAF test launches in Douglas harbour, training at RAF Jurby and various military parades.”.

The film screening takes place on 11 November at 1pm in the Manx Museum Lecture Theatre. Admission is free, but please book a ticket at www.manxnationalheritage.im/whats-on.

Donations to support Manx National Heritage in continuing the care and promotion of the Island’s natural and cultural heritage are needed and welcomed by the charity (Isle of Man registered charity no. 603).