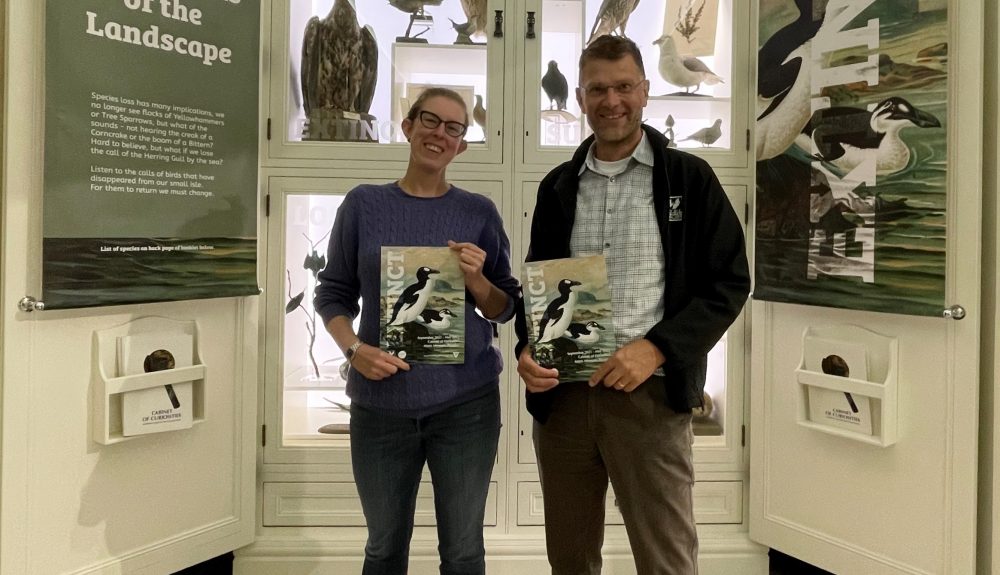 Manx National Heritage, the registered charity responsible for the Isle of Man’s natural and cultural heritage, has opened ‘Extinct’, a new exhibition highlighting the plight of rare and endangered species on the Isle of Man.

Curated by MNH, in conjunction with Manx Wildlife Trust, the exhibition draws attention to the acute pressure on the Island’s natural environment including human impacts and climate change.

“One of our core strengths as a nation is the sense of community and passion for our Island’s stunning natural environment, which is celebrated through our UNESCO biosphere status.  This status places a responsibility on us all to work together on a personal, community, corporate and government level to protect this incredible natural environment we all enjoy so much.

All of the wonderful species and creatures that share our Island, play a key role in creating and sustaining the unique biosphere of the Isle of Man”.

Sadly, protecting our island biosphere is too late for some species that have become locally extinct on the Isle of Man, most recently, the Yellowhammer, which was once one of our most ubiquitous farmland birds, but disappeared from our Island landscape as recently as 2019.

Listen to excerpts from Extinct in ‘Sounds of the Lost – Locally Extinct Bird Calls on the Isle of Man’*:

Plant species at risk include species such as the Manx Cabbage or Caayl Vannin, and more common species including Elm, Eelgrass and Spindle, which are at risk of loss.

This eye-catching exhibition is exceptionally thought provoking and aims to inspire all who visit to help protect the Isle of Man’s natural environment and prevent more species being added to the Island’s endangered and extinct lists.   We’ve already succeeded in the recolonization of the Calf of Man by the Manx Shearwater, a remarkable achievement for our Island biosphere.

Through raising awareness and working together, we can achieve more stories of success and pass our Island on to future generations in a better condition than we inherited it”.

The exhibition uses images from the MNH archives, excerpts from recent surveys, data from different organisations, eye-catching photographs from wildlife photographers and soundscapes of the lost bird calls from the Isle of Man’s landscape.

Specimens on display include a White-tailed Eagle and are all from the Island, with each one highlighting why it is important that we hold these historic collections; they are proof of what was here and when, can be used to educate people about what they can no longer see living and illicit a spark of passion so that we protect what we still have.

“We have much to be grateful for on our beautiful Island, including many iconic and abundant species considered rare elsewhere, including Chough, Hen Harrier & Peregrine.  However, we have lost many species since records began and some, like the Isle of Man Cabbage, are teetering on the edge.

Unfortunately, losses continue; it now appears that the Yellowhammer, once our most common farmland bird has very recently been lost as a Manx species.  Sadly, the only physical evidence of their former presence is of taxidermy specimens within the Manx Museum’s collection.  This is a story that has to be told.  Of course, we can restore nature across the Isle of Man, but it will need public and political support and adequate resources, as shown by the tentative but encouraging return of the Puffin to the Calf of Man after a decade of control of a non-native species.

Thankfully efforts are now being made to reverse declines across the whole Isle of Man, including the recent launch of an Island-wide Agri-Environment Scheme which will encourage lost birds such as the Lapwing to return to rear chicks in our fields once more.  Excepting the Great Auk, which is globally extinct and will never again grace our shores; each of the lost species on display could make a comeback if we are willing to make more space for nature on our Island.”

Running until the 31st May 2022, ‘Extinct’ is on display in the Cabinet of Curiosities at the Manx Museum.  Admission is free.

Image caption: Laura McCoy of Manx National Heritage and Leigh Morris, CEO of the Manx Wildlife Trust highlight the plight of our Island’s rare and endangered species in ‘Extinct’.