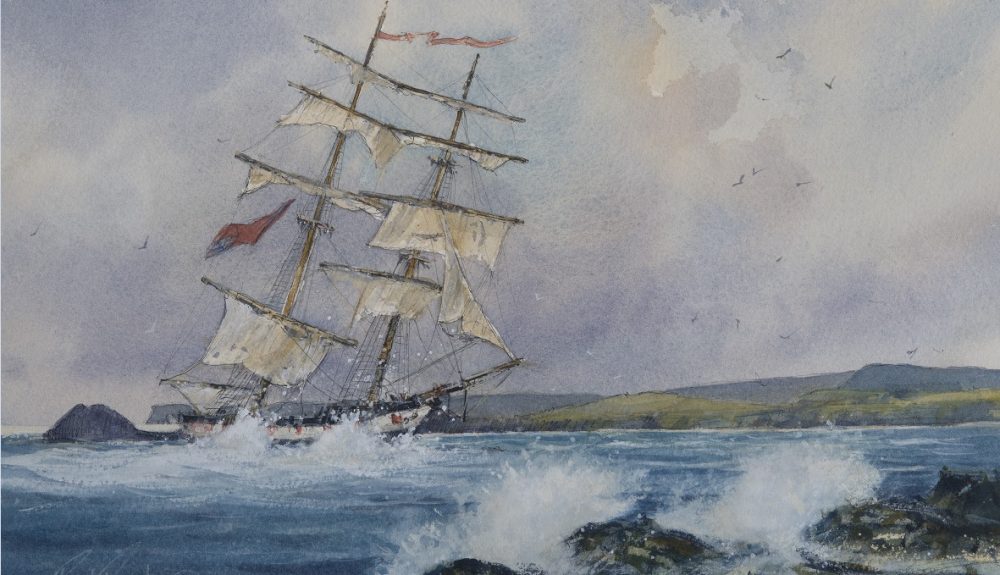 December 14th 2022 will mark the 200th anniversary of the sinking of the British naval ship, Brig of War HM Racehorse with final preparations underway for events to commemorate the tragic loss of the vessel which sank off Langness in the Isle of Man 200 years ago with the loss of nine lives.

Although some 98 men survived the sinking on 14th December 1822, nine never returned home after they went out in the storm to rescue those on the stricken ship only for the rescue boat to overturn on its final run. Three were from Castletown. The loss to the local families was the catalyst that inspired Sir William Hillary to encourage the UK Government to create a national maritime lifesaving organisation, which became the RNLI in 1824.

Two main events in Castletown will mark the 200th anniversary of the tragedy.

14th December 2022 (200 years to the day since the tragedy): At 2.00pm a special Ceremony will take place on The Quay, Castletown, when Lieutenant Governor Sir John Lorimer will unveil a memorial plaque which is to be located on the Castletown Harbour Office. His Excellency will be accompanied by Lady Lorimer.

The Bishop of Sodor and Man will bless the memorial and conduct a short service with music from Castletown Metropolitan Silver Band.  The Chairman of Castletown Town Commissioners will attend along with other dignitaries.

Among those attending will be some of the original divers who located the wreck in the 1960s and subsequently recovered many artefacts, which are now held in the Manx Museum.

One of the guests will be a descendant of Charles Keiggart [pronounced Caggett] who was one of the ships’ personnel lost in the incident. He is buried in an unmarked grave in Malew Church.

Members of the pubic are welcome to join the unveiling event and are asked to be at The Quay area by 1.45pm.

Admission is free, and the exhibition will be open every day from 11.00am to 3.00pm, Monday to Saturday* inclusive, from 15th December through to 30th December 2022. [* excluding Christmas Day and Boxing Day].

In addition, a church service commemorating the loss of HM Racehorse and acknowledging maritime heritage and the RNLI will be held at Kirk Malew (where the local men are buried) at 9.30am on Sunday, 18th December.

The exhibition has been organised by Manx National Heritage in conjunction with the Commemorative Group, Isle of Man Sub Aqua Club and Castletown Commissioners.

Indeed, the events of the evening of December 14, 1822, are widely acknowledged to have been a final catalyst that galvanised local resident Sir William Hillary to petition the UK Government to fund and support an organisation dedicated to shipwreck rescue. Eventually the institution became a reality and what would become the RNLI was formed in March 1824.

Manx National Heritage have thoroughly enjoyed partnering with the Commemorative Group, a voluntary group of residents who have worked tirelessly to put together plans and we have witnessed their dedication first-hand to commemorate this milestone.

We are also extremely grateful to members of the Isle of Man Sub Aqua Club.  The Club owns the wreck site and their support of the 200th commemorations has been invaluable.  Members have spent time this spring and summer capturing underwater video of the site, along with a 3D photogrammetric survey of the site with the assistance of Dr Jon Chamberlain from the University of Essex.  Visitors to the exhibition will be able to view this remarkable footage and see for themselves the wreck site.”

The exhibition will display some of the artefacts recovered from the wreck in the 1980s, and will commemorate the loss of HM Racehorse and the bravery of the Castletown men who saved many lives.  There will also be underwater video footage of the site taken earlier this year.

Alongside the exhibition, Manx National Heritage will be publishing a catalogue of all finds from HMS Racehorse via www.imuseum.im, which will be launched to coincide with the exhibition and 3D footage made available on www.sketchfab.com.

The wreck site was discovered in the 1960s and survey and excavations by local divers, led by Brian King, recovered over 200 artefacts from the site. Those artefacts are now part of the national collections, cared for by Manx National Heritage. The wreck site is currently the only legally protected wreck site in Manx waters.

“As well as being a tragedy that greatly impacted on the then small town of Castletown, this is an important historic event that had repercussions around the British Isles.  As a result, Sir William Hillary called for a National Maritime Lifesaving Organisation, which was eventually set up and evolved into what we know today as the Royal National Lifeboat Institution, which will be celebrating its 200th anniversary in 2024.

We are very grateful for the support of Manx National Heritage, Castletown Town Commissioners, the Department of Infrastructure, Culture Vannin, IOM Post Office, Brian King and Paul Parker, the vicar and wardens of Kirk Malew who care for the graves of those lost and have organised the church service, along with all who have helped us organise the commemorations.

We hope people from across the Island will come along to these special town events, to learn about the incident of the 14th December 1822, when HM Brig of War Racehorse was lost off Langness”.

Image caption: Tragedy struck for HMS Racehorse at The Skerranes, Langness on 14th December 1822.  This painting of the tragedy is featured on the Isle of Man Shipwrecks Commemorative Stamp Set produced to capture the stories of the most notorious and significant shipwrecks in the waters off the Isle of Man over a period of almost five-hundred years.