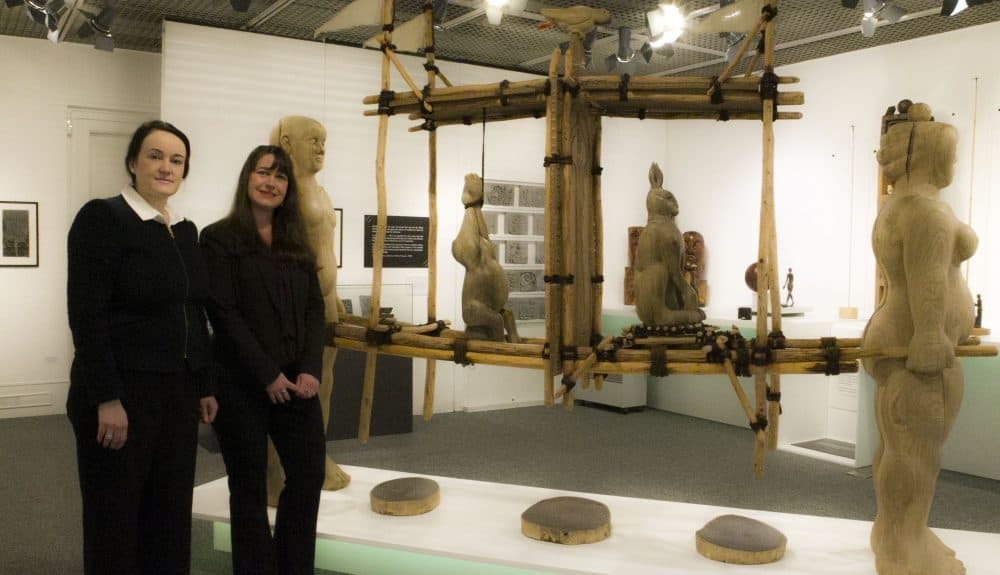 Manx National Heritage, the national heritage agency for the Isle of Man, is pleased to announce the opening of its latest exhibition ‘Crossing Open Ground – David Gilbert: A Retrospective’, at the Manx Museum, Douglas.

‘Crossing Open Ground’ is being staged at the Manx Museum as part of a collaborative venture with the Sayle Gallery, where the second instalment of the exhibition of called ‘Another Story About How It Is’ is on display. The two instalments of the exhibition provide complementary explorations and displays of David Gilbert’s artwork and illustrate the wide variety of work that he created throughout his artistic career.

Although not such a familiar name as he once was on the Isle of Man, many people on the Island will instantly recognise David Gilbert’s work, even if they may not know the name of the artist. David Gilbert designed the distinctive and iconic set of images around the top of the extension of the Manx Museum, vividly illustrating the history and culture of the Isle of Man for all to see.

The ‘Crossing Open Ground’ exhibition at the Manx Museum contains art spanning a lifetime of work and completes an artistic journey which began with David Gilbert’s last exhibition at the Manx Museum in 1989 “In The Presence of…”. In 1989 and now, again in 2018, the centrepiece for both exhibitions was and is the monumental sculpture “In The Presence of….” (Mountain Hares), a dramatic and fascinating work of art that is both large in scale and intricate in detail and encompasses all of the artist’s fascination with the cycles of life and death in the world around him.

The artwork on display in the Manx Museum exhibition ranges from the small and delicate through to the large and monumental, but whatever the scale and intricacy of the work the same immense themes of birth, love, death and the rhythms of life and the land are explored, frequently with a Manx perspective.

David Gilbert was an artist who passionately believed everyone could be creative and helped many to discover their own creativity. This was a thread that ran throughout his artistic life and in particular during the time that he lived on the Isle of Man during the 1970s and 1980s. David Gilbert lived at the Bishops Demesne Farm at Ballaugh with his wife Sheila, and their family, where they had their own smallholding and grew their own food. In many ways David Gilbert wasn’t the typical artist, he was a Cambridge graduate of English, fascinated by philosophy and literature and a self-taught sculptor and artist who worked predominantly in wood and who rarely exhibited his work. He dedicated an immense amount of his time to creating large works of art but also taught at the Island’s college and on his farm, as well as working with the local Manx art community. In all these ventures, David Gilbert was a person who inspired others to be creative.

“The more that I have looked at the life and work of David Gilbert and the more I have spoken to people who knew him and worked with him during his time on the Isle of Man, the more fascinated and amazed I have become.

David Gilbert was someone who really did change people’s lives and was a person who inspired others to be creative and to look at the world around them in different way.  I think that that is an incredibly important and valuable gift both to have and to share with others.

For David Gilbert art and creativity wasn’t a luxury or an optional extra to life but was and could be an integral and essential part of life for everyone.

Hopefully people will be inspired by what they have seen in the exhibitions at the Manx Museum and at the Sayle Gallery and will want to try their hand at being creative themselves. That would be the greatest legacy of all, if David Gilbert’s artwork can continue to inspire people to discover and engage with their own creativity and to look at the world around them with new eyes and insight”.

The majority of the artwork on display at the Manx Museum and the Sayle Gallery is on loan from the David Gilbert Art Trust (http://www.david-gilbert.co.uk/) and has been brought to the Isle of Man with the generous assistance of Isle of Man Steam Packet Company.

“The exhibitions will honour David Gilbert’s legacy and we were only too happy to support Manx National Heritage in helping bring his artwork to the Island. I’d encourage anyone with a love of art to visit the exhibitions and see David’s work at first hand, and hopefully many of the Island’s young artists will visit and be inspired.”

“Manx National Heritage extends their thanks to The Isle of Man Steam Packet Company for their assistance in transporting David Gilbert’s work to the island.   As a registered charity, this support makes a huge difference and helps Manx National Heritage deliver a diverse public programme at the Island’s heritage sites“.

Discover more about David Gilbert’s artwork and the different ways in which his work was inspired by the Manx landscape at the ’Crossing Open Ground’ exhibition, which is on display at the Manx Museum, Douglas, until 5 May 2018 and and ‘Another Story About How It Is’ at the Sayle Gallery, until 18 March. Admission is free, with donations welcome.

Image Caption: Lynsey Clague of Manx National Heritage and Renee Caley of Isle of Man Steam Packet Company pictured with “In the Presence of….” (Mountain Hares) 1982 – 1984. This large scale piece took David Gilbert two and a half years to create.