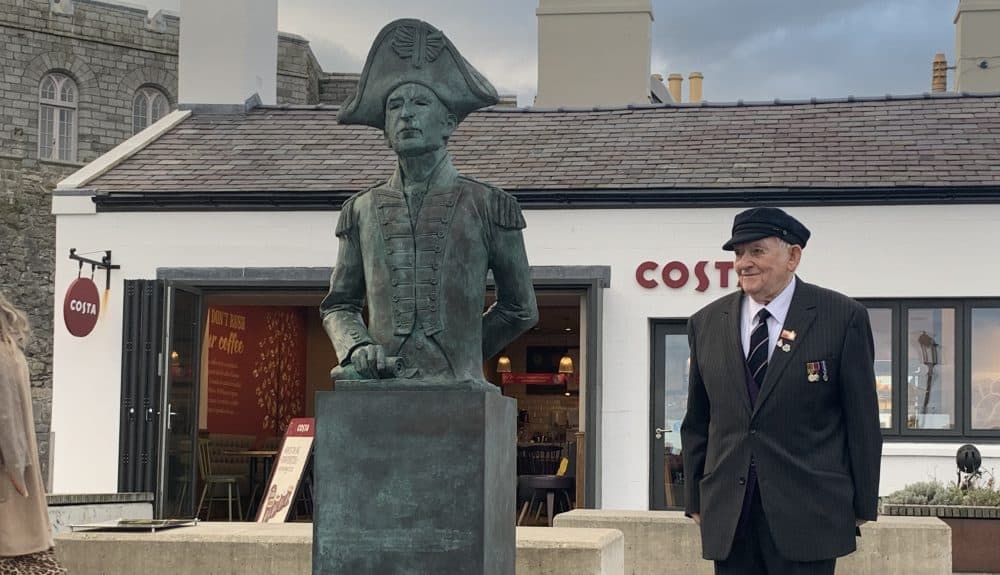 Born in 1771at Ballakelly Farm in Marown, he was the son of a farmer and joined the Royal Navy in 1791.  He showed great potential and rose through the ranks, rapidly receiving a commission. He became the equivalent of a millionaire in 1799 with his share of the prize money after the capture of a Spanish Treasure ship.  At the Battle of Copenhagen in 1801 he came to the attention of Admiral Lord Nelson, who requested that he serve aboard HMS Victory.

During the Battle of Trafalgar, the ships wheel was shot away.  Quilliam rigged up a temporary method of steering her using ropes, in the gunroom below”.

Quilliam took up a seat in the House of Keys but returned to sea to command several ships before retiring at the end of the Napoleonic Wars.

Designed by Manx sculptor Bryan Kneale RA MBE, the bronze sculpture depicts Captain Quilliam in uniform and commemorates his role as the most famous Manxman to have participated in the Battle of Trafalgar.

Commissioned by the Council of Minister’s Trafalgar Committee, the statue was originally unveiled in 2005 to commemorate the 200th Anniversary of the Battle of Trafalgar.  It later won the Marsh Award for Excellence in Public Sculpture, an award recognising the UK’s most outstanding public sculptures and works of art.  Unveiled in 2005 by Captain Jack Ronan, 15 years on, aptly, Captain Jack once again did the honours in unveiling the Quilliam bust in its new home looking out to sea.

The site across from Castle Rushen, known as the Quarterdeck, was formerly the site of a Customs House and was recently landscaped by MNH as part of the improvements to the setting of the Castle which included a new cafe.

In this video naval historian, Professor Eric Grove talks about the significance of Captain Quilliam’s naval uniform, now on display in the new military history gallery at the Manx Museum.