BRONZE AGE JEWELLERY DECLARED TREASURE ON THE ISLE OF MAN 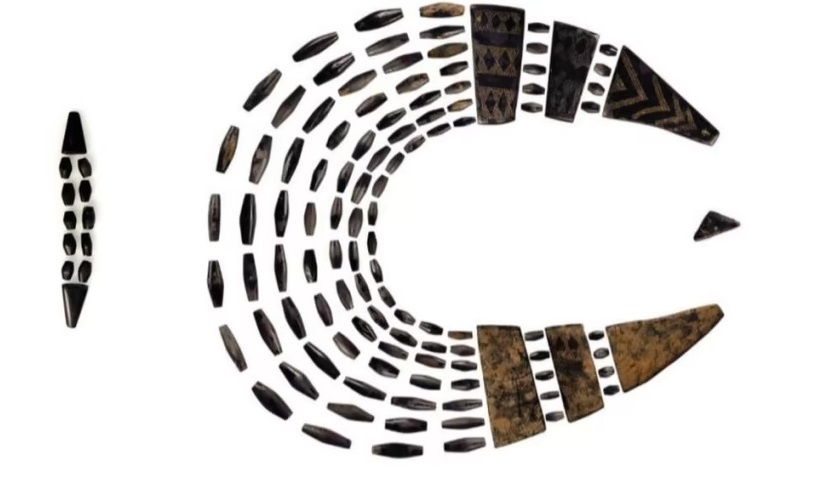 Found during planned archaeological excavations at Berk Farm near Kirk Michael as part of the Round Mounds of the Isle of Man project, the find consists of 122 jet beads that make up a complete necklace and a matching bracelet.

“This really is an astonishing find.  These are the very personal belongings of someone who was buried four thousand years ago.”

The necklace has a terminal plate at each end, and two “spacer-plates” on each side. In between these decorated plates and forming the majority of the necklace are one hundred and three undecorated, but carefully fashioned, barrel-shaped beads.  There is also an undecorated triangular-shaped bead which would have been used to secure the necklace around the neck.

All of the beads appear to be made from jet (fossilised and pressurised wood) which can be prone to splitting.  The maker would have been extremely skilled to decorate the larger terminal and “spacer-plates” beads, as well to produce the large number of hollowed and shaped barrel-shaped beads.  What is even more remarkable is the presence of the string-distribution holes in the decorated plates.  These allow the number of strings of beads to go from four, to five to seven strings of beads in total.  Somewhere inside the spacer-plate beads, a Y-shape has been formed to allow the different number of strings to be passed through and secured.

The bracelet is made from two strings of barrel-shaped beads, with an undecorated terminal plate at each end.

The jewellery would have been a tremendously high status object when it was buried, due to the skill required to work the jet.  Even after four millennia, the necklace and bracelet still look extremely attractive.

The majority of the beads were excavated in 2019, but it was just this year that excavations on the site were completed and so it is now clear that this collection of artefacts is the complete assemblage from this particular burial.

The beads were worn and buried with someone who was laid in a specially dug oval pit in a grave lined with stones.  They lay on their right side in a crouched position, wearing the necklace and bracelet, with at least the wrist with the bracelet on drawn up to their chest. They were facing the coast, looking out towards the Mull of Galloway.

Further afield, only around 90 examples of similar necklaces and bracelets have been found in Britain and Ireland, mostly in northern England and Scotland but with relatively few complete examples, and still fewer “sets” of necklace plus bracelet.

“We are very grateful to the excavation team for sharing their interpretation of the site with us and to Dr Alison Sheridan, retired curator at National Museums Scotland, for sharing her expertise on these particular artefacts.  And a special thank you to the landowners of Berk Farm, Robert and Anne Cannell, who have been so supportive and enthusiastic”.

The Isle of Man in the Bronze Age

The Bronze Age ran from around 2000 BC to 500 BC and was a time of great change on the Island.  The name comes from the then new technology of metalworking, first with copper then with bronze (an alloy of copper and tin).  The process was brought to the Island, but it is probably that local sources of copper were used.  The introduction of the new technology demonstrates the movement of ideas and resources around the British Isles in this early period.  Burial rituals were also changing, becoming more varied and including cremations and inhumations (burial of the body).  Communities were living in simple round houses, often in small settlements, farming the land.  Bronze Age finds have been made from all over the Isle of Man and many can be seen in the Manx Museum, Douglas.

When finds of archaeological artefacts are made on the Isle of Man there is a legal requirement to report them to Manx National Heritage.  If the artefacts fall under the categories in the Treasure Act 2017 (which include being so closely connected with Manx history and national life that their loss would be a misfortune, and/or being of outstanding significance for the study of any branch of Manx art, learning or history) the find must also be reported to the Coroner of Inquests.  The Coroner decides whether or not an artefact is “Treasure”.

The Round Mounds of the Isle of Man project

Previous fieldwork at the site near Kirk Michael has uncovered a complex burial site containing multiple burials and cremations, and recovered a remarkable array of artefacts, including several clay pots which have been used as containers for cremations, and, uniquely on the Island, the jet bead necklace and bracelet.

The fieldwork is only one aspect of the research project, which has also involved the construction of a database of all records in MNH’s Historic Environment Record relating to previous discoveries of Bronze Age burials on the Island, geophysical survey, and analysis of LiDAR survey data (which detects small changes in surface topography indicating buried archaeology).  Together these enabled the identification of the site south of Kirk Michael as a candidate for investigation to answer a series of research questions.

Laboratory investigation has also been undertaken of ancient cremated human remains found during previous excavations over the last century and stored in the national collections curated by MNH.

MNH has been the third partner in the project throughout, opening the Manx National Collections and Archives to specialists within the team, and providing – through our charitable resources – a substantial proportion of the funding required to undertake both the fieldwork and the scientific reassessment of finds from previous excavations.

The final season of excavation took place in June and July this year and the team will now assess their discoveries and publish their findings.

Isle of Man Registered Charity No 603.