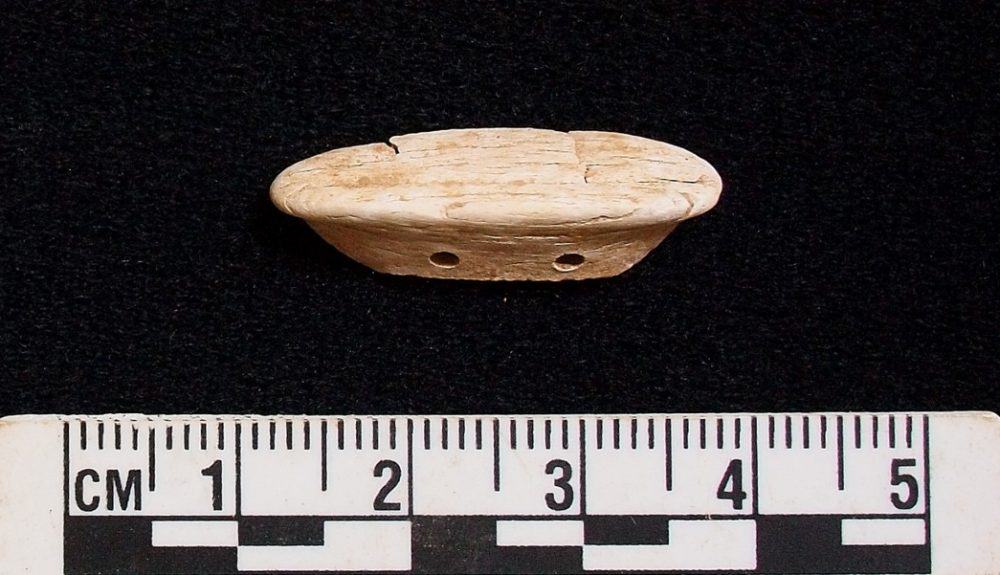 Archaeologists studying Neolithic and Early Bronze Age human remains in the Manx Museum collection for the ‘Round Mounds of the Isle of Man’ project have made an exciting discovery.

Contained within a box of cremated bones excavated in 1947, osteologist Dr Michelle Gamble, discovered a collection of small bone objects that had not been noticed by the excavators. The bones had been buried almost 4000 years ago at Staarvey Farm in what is now German parish, Isle of Man.

The site was excavated by Basil Megaw (1913-2002) who was director of the Manx Museum (1945-1957). Mr Megaw had been contacted by the farmer who had hit a large stone during ploughing. Excavations revealed a stone-built cist (a box made out of stone slabs) containing fragments of burnt bone, two flint tools, and two Collared Urns (Bronze Age pots) buried upside-down. But it is only now that the bones have been studied in detail.

“There was a large quantity of cremated bone from this site. The first step of the osteological analysis is to clean and sort the bones, so that we can determine the number of individuals present and any age or sex information. Within this burial, we have four skeletons, very fragmented and mixed together – 2 adults, one of which is a male, an adolescent, and an infant. The bone objects were burned as well and mixed in with the cremated human remains.”

Dr Chris Fowler, co-director of the Round Mounds of the Isle of Man project, said:

“I opened my email to find a photograph of an extremely rare Bronze Age object – a bone pommel from a bronze knife. This would have been fitted to the very end of the hilt. There are only about 40 surviving knife and dagger pommels of this period from the British Isles, and none have been found on the Isle of Man before – so I was very excited!

The size and shape suggest it was once attached to a small knife which archaeologists call a ‘knife-dagger’. Knife-daggers have been found buried with both males and females. Several other bone objects were found amongst the cremated bone. One is a burnt bone point or pin. A recent study of such objects found that few showed evidence of wear on the tip, suggesting that these were not tools, so it will be interesting to examine the end point of this example closely to see if there is evidence of use wear. It is perforated at the other end so may have been attached to clothing or a head covering. Some of the other objects may be burnt bone beads, and there are four enigmatic worked bone strips which we are still working to understand.

The objects may have been worn by one or more of the dead as they were placed on the funeral pyre, or may have been placed by the dead on the pyre by mourners. It is possible that there were multiple episodes of burial in the cist, but we do not know how many of the individuals were buried at the same time and with which objects or how many cremation events took place.

The burial itself is fairly unusual among contemporary burials we know of from across Britain and Ireland. It is rare to find cremated remains buried in both a Collared Urn and cist – it was typically one or the other. There are records of about 50 similar burials of cremated remains discovered in a cist and containing a Collared Urn across Ireland, Scotland, northern England, and particularly Wales, and we are comparing the Staarvey burial with these at the moment.”

“The reassessment of finds from earlier excavations is always worthwhile.  The finds can be the only parts of the original monuments that survive and although not every artefact was looked at in great detail at the time, they were catalogued and preserved.  Modern scientific techniques can now give a lot more information about these finds, but so can the low-tech approach of a skilled pair of eyes examining the finds in detail.”

The current project aims to investigate what these sites and their associated burials, people and artefacts can tell us about life on the Isle of Man and interaction with other communities across Britain, Ireland and potentially beyond. It includes analysis of the landscape location of the mounds, geophysical survey at several sites, and re-analysis of both previously excavated remains and records of previously destroyed or excavated sites.

The project, which began in September, is directed by Dr Rachel Crellin (University of Leicester) and Dr Chris Fowler (Newcastle University) and has received funding and support from Culture Vannin and Manx National Heritage. Culture Vannin funded the examination of the human remains and are also supporting a series of workshops for school children that will be delivered by Michelle and Rachel in 2017 across the island.

For more information about the project please visit: https://roundmounds.wordpress.com/.