Around 950 AD, a female was buried with her worldly goods on the Isle of Man. From a time when Vikings ruled the land and seas, it is more common to find male burials with status symbols. However, the Pagan Lady was buried in a Christian cemetery with her fine necklace.

The beads came from far and wide – Britain and Europe – and some were 300 years old when the Pagan Lady wore the necklace.

The burial demonstrates not only the real existence of powerful and high status females in a period of history that is usually dominated by the males, but also the ancient appreciation of ornamentation, of personal decoration – of pretty things. A question remains over who she was, although we now know that she was a traveller who was not Island born, but came here and was finally buried on St. Patrick’s Isle.

Other burial goods have been interpreted as domestic trappings – she was the head of the home. But perhaps she was also something else – a wise woman, a healer, a shaman. 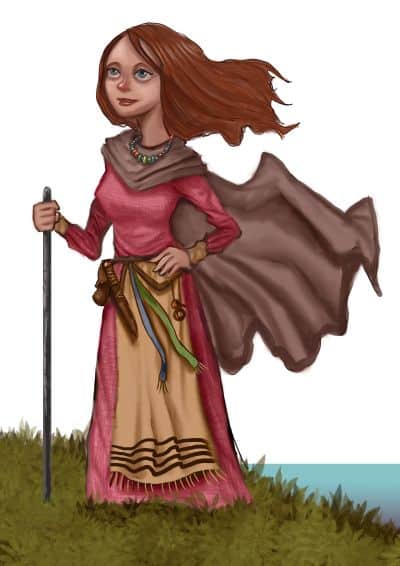 Watch our museum archaeologist Andrew Johnson describe his experiences in participating in the Peel Castle excavations then investigate our museum collections online to learn about the skilled crafts people that made objects of beauty.

Find out more about how Peel Castle has developed over time by investigating the maps and building phases in the resources below.